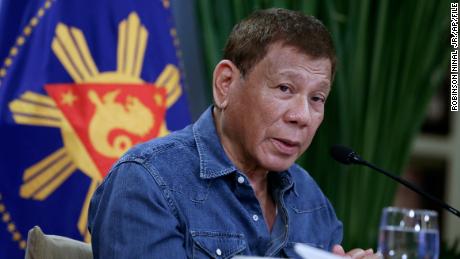 In a recorded public address aired over state-run PTV-4, the tough-talking President warned those who refuse to be inoculated with the Covid-19 vaccine to just leave the country as he stressed that getting vaccinated is the only solution to end the pandemic.

In his Twitter account, Presidential spokesperson Harry Roque said President Rodrigo R. Duterte made a decision to reconsider his policy pronouncement last week to scrap the policy of requiring the public to face shields.

"As far as arresting those who won't get vaccinated, we have no such policy", Nograles said, speaking partly in Filipino. There is a crisis being faced in this country.

"You choose, vaccine or I'll put you in jail", the President reportedly said during a televised speech on Monday concerning the low attendance of citizens to vaccination centres in Manila as reported by Astro Awani. "But for as long as you are here and you are a human being and can carry the virus, e magpabakuna ka (you should get vaccinated)", he added.

However, Justice Secretary Menardo Guevarra countered the President's remarks and said that there is no law compelling citizens to get vaccinated. After repeated delays, vaccinations started in March, but many still opted to wait for Western vaccines, prompting some cities to offer snacks and store discounts to encourage people to get immunized with any vaccine. "I'm just exasperated by Filipinos not heeding the government". Village leaders should keep a list of those who refused to be vaccinated, he said. President Duterte responded by saying that he will not obey the courts on how to manage the pandemic.

If implemented, Duterte's threat could be among the severest measures to boost inoculations in a nation where majority are unsure of or reject vaccines. Sinovac Biotech also plans to raise Covid-19 vaccine deliveries to as many as 6 million doses per month through September, he said. "Why would I defend or face an accusation before white people".

On Thursday last week, Malacañang confirmed that President Duterte preferred that people only be required to wear face shields in hospitals.

Philippines' President Rodrigo Duterte threatened to jail people who refuse to be vaccinated against the Covid-19 as the Philippines battles one of Asia's worst outbreaks, with over 1.3 million cases and more than 23 000 deaths.