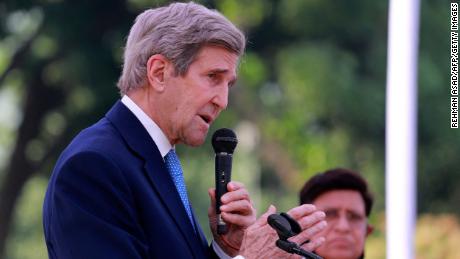 US Special Presidential Envoy for Climate John Kerry will visit China and South Korea this week, the State Department said, ahead of a US-hosted climate summit of world leaders, including South Korean President Moon Jae-in.

Kerry is in Shanghai at the invitation of the Chinese ministry of ecology and environment, said Zhao Lijian, a spokesman at the foreign ministry, when asked at a regular media briefing who proposed the face-to-face meeting.

Speaking to reporters on Monday, White House Press Secretary Jen Psaki revealed that Kerry will discuss with regional leaders how to cooperate on climate issues.

US President Joe Biden has invited the leaders of 40 countries to the climate summit, including China, Japan and Russian Federation. Biden is hoping to confirm cooperation with Japan in a wide range of fields when he meets Prime Minister Suga Yoshihide on Friday.

As ties between China and the United States have been frayed in various fields, USA climate envoy John Kerry's visit to China on discussion of climate issue is believed by Chinese observers to be a positive signal, though the impact of the visit on bilateral ties is still limited, Global Times reported.

Covid patients with sedentary habits more likely to die, study reveals
According to reports, lazy people are at a higher chance of dying if they report being COVID-19 positive. The study also relied on patients' own assessments of their physical activity, they said. 4/14/2021

Canada receives report of blood clot linked to AstraZeneca
Treasurer Josh Frydenberg said the setbacks in the vaccine rollout should not "derail momentum in our economic recovery". "Right now, more contagious and risky variants are spreading and threatening the progress we've made", he said. 4/14/2021