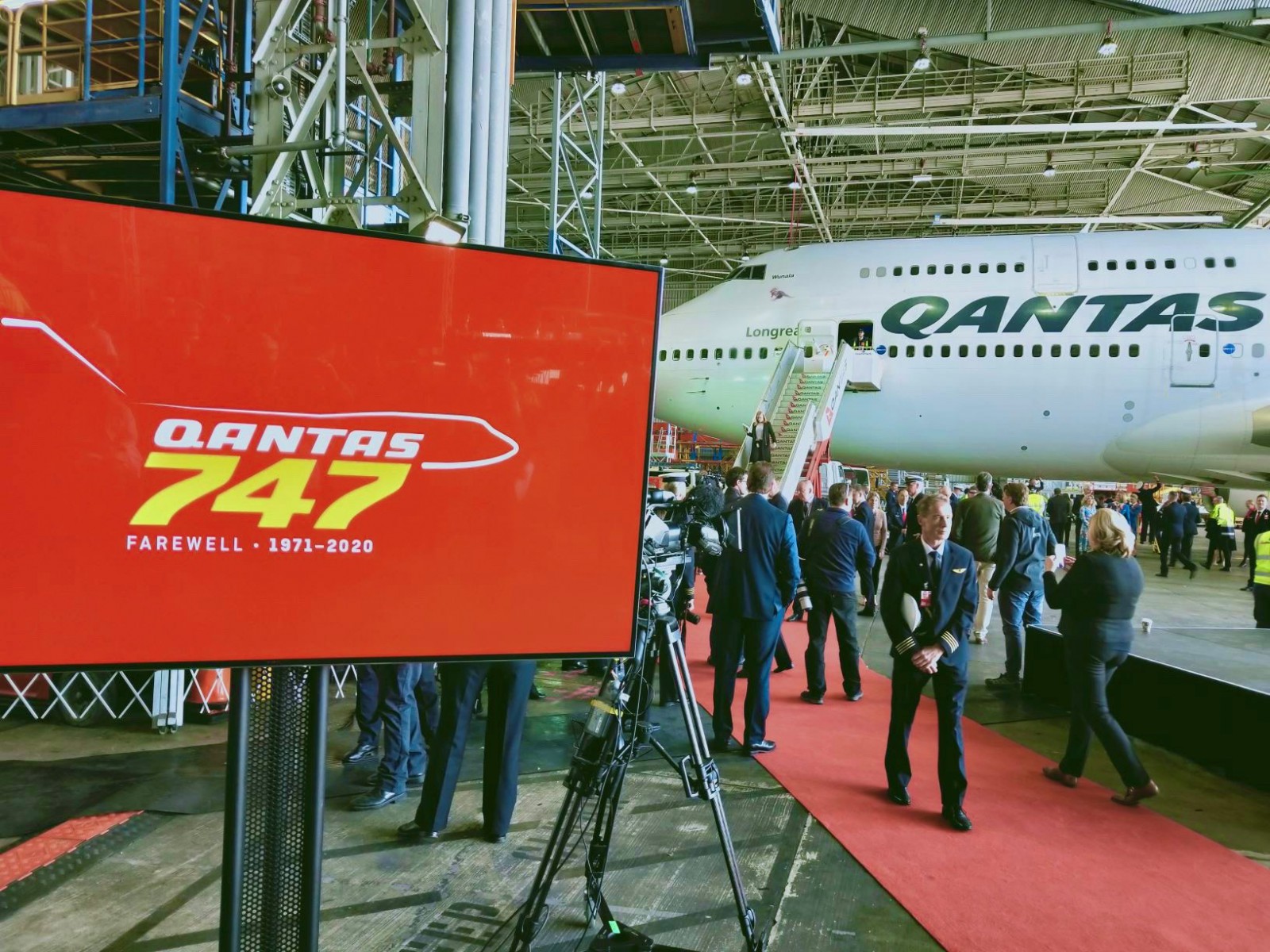 CEO Alan Joyce said the retirement marked the end of an era in Australian aviation history.

Qantas took delivery of its first 747 in August 1971, the same year that William McMahon became Prime Minister and the first McDonald's opened in Australia, making global travel possible for millions of people for the first time.

After making a scenic departure over Sydney and a low pass over the Historical Aircraft Restoration Society (HARS) in Wollongong, which hosts a retired Qantas 747, QF7474 turned east over the Tasman Sea to draw Qantas' iconic kangaroo. The result can be seen on all flight radar platforms around the world, providing a welcome spectacle for planespotters.

The arrival of the Boeing 747, in the same year that William McMahon became Prime Minister and Australia welcomed its first McDonald's, made global travel economically possible for millions of people. The plane brought home a record 674 passengers out of Darwin following Cyclone Tracy in 1974 and flew medical supplies in and tourists home from the Maldives and Sri Lanka following the massive tsunami in December 2004.

"Time has overtaken the 747 and we now have a much more fuel-efficient aircraft with even better range in our fleet, such as the 787 Dreamliner that we use on Perth-London and hopefully before too long, the Airbus A350 for our Project Sunrise flights non-stop to NY and London", Joyce said. The plane was loaded with cargo bound for Los Angeles before the aircraft goes into storage at a boneyard in the Mojave Desert, according to the Qantas press release.

"It's hard to overstate the impact that the 747 had on aviation and a country as far away as Australia".

"This aircraft was well ahead of its time and extremely capable".

The 747 "put worldwide travel within reach of the average Australian and people jumped at the opportunity", Joyce said.

The airline's first female captain, Sharelle Quinn, will be in command of the final flight, and said it had been an "absolute privilege" to fly the aircraft for 36 years.

'Everybody in Australia, everybody in the world knows the shape of the 747, ' he told ABC Radio on Wednesday ahead of take-off.

"It's like Aeroplane Jelly and Vegemite - it's always been there".

Today we say goodbye to our final 747 VH-OEJ as it departs Sydney for the last time.

Polar bears could be extinct by end of the century
Unlike other species threatened by hunting or deforestation, polar bears can only be saved if their habitat is protected. Right now, just a degree rise in warming has triggered a peak of heatwaves, droughts and superstorms by the rising sea. 7/23/2020

Coronavirus: Fans must wear face coverings at National Football League games
Some teams, including the New York Jets , the New York Giants and Philadelphia Eagles , are expected to play without crowds. On the flip side, the Jaguars recently announced they'll allow 25 percent of seating at their home games. 7/23/2020

Caldwell leads Irish challenge at British Masters
That round keeps him within striking distance of Scotland's David Law who leads the way as the European Tour resumes in earnest. So far I think it's gone really well. 7/23/2020

LinkedIn cuts 960 jobs as pandemic puts the brakes on corporate hiring
The cuts affect 6% of the company's workforce, LinkedIn CEO Ryan Roslansky wrote in a note to employees . Mr Roslansky said LinkedIn was "not immune to the effects of the global pandemic". 7/23/2020

PGA Tour Series-China cancels season over coronavirus
He also said, "We have enjoyed five great years in China, and this was shaping up to be the most successful season in our history. Two global qualifying tournaments were to follow but were suspended as Covid-19 spread throughout Asia. 7/23/2020

Statistics Canada set to give reading on inflation for June
OTTAWA-Canada's annual inflation rate returned to positive territory in June, led by higher prices for food and shelter. Clothing prices rose 1 per cent in June, recovering some of the declines from a month earlier. 7/23/2020

Trump campaign says plans in place for both indoor, outdoor convention
Hotel rooms will fill up. "This is a much bigger animal than I think, with the details, than most people want to realize", Ivey said. "The reality is there's a timeline". 7/23/2020

Sterling downs Watford with a brace in 4-0 rout
The Watford vs Man City, Premier League match will be played on July 21, 2020, at Vicarage Road Stadium. This happened because something was wrong and I need to discover what it was ahead of next season". 7/23/2020