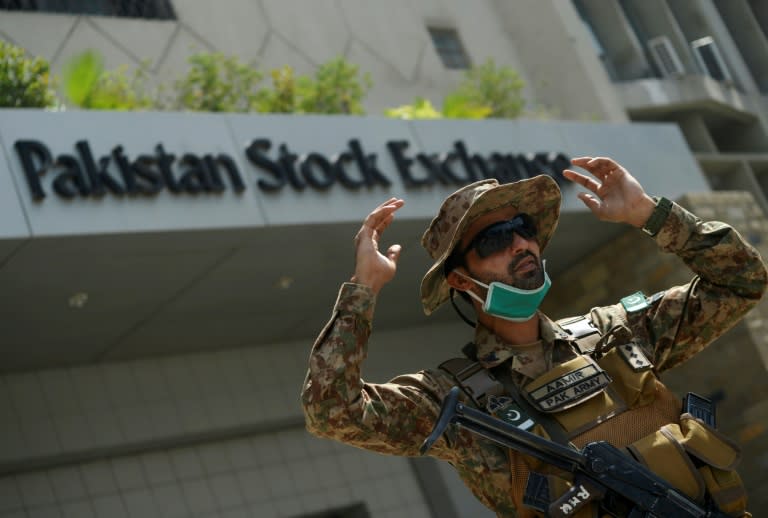 Karachi police chief Ghulam Nabi Memon said: "Four attackers have been killed, they had come in a silver Corolla auto".

Four gunmen attacked the Pakistan Stock Exchange building on Monday, killing at least three people including two guards and one policeman, while the four assailants were also killed by gunfire.

The Baloch Liberation Army, an insurgent group seeking self-determination for people in the country's restive southwestern province of Balochistan, claimed responsibility for the attack.

The BLA has been responsible for several attacks on Chinese interests in the country.

Fakhar Kakakhel, a senior journalist covering militancy in Pakistan, said the PSX was selected as a symbolic target for Pakistan's economy and its close links to the economic corridor.

The BLA have targeted infrastructure projects and Chinese workers in Pakistan multiple times in recent years, including an attack on Beijing's consulate in Karachi that killed four people in 2018.

The group also circulated to the media a photograph of four men in full body armour and camouflage outfits, saying they were the militants who attacked the stock exchange.

The group has been waging an insurgency for years, demanding independence for Pakistan's gas-rich south-western Baluchistan province.

"There is no doubt that India was behind yesterday's attack", PM Khan told the parliamentarians.

"They gave us examples of Sindh. if I was listened to, I would still not have enforced the lockdown that we did". Police have recovered weapons and hand grenades from the attackers.

Militants from the Baloch Liberation Army say they were behind the attack. The Pakistani government expected that such an attack could be perpetrated.

The gunmen never made it into the stock exchange and business continued as usual after the attack.

The injured people have been taken to hospital.

Karachi was once a hotspot for crime and violence, with heavily armed groups linked to politicians frequently gunning down opponents and launching attacks on residential areas.

Pakistan has always been plagued by Islamist militant violence but attacks have become less frequent in recent years.