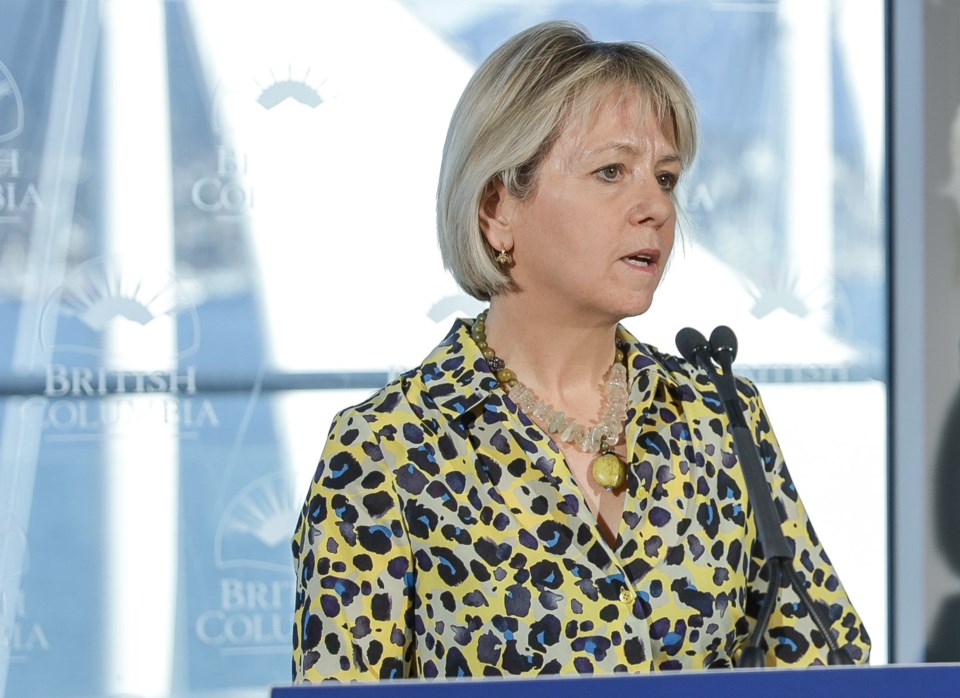 The incubation period of the virus is up to 14 days, and Dr. Henry says when someone is identified as a presumptive, or confirmed case of COVID-19, they track everywhere that person had been in the 14 days to find if there are other people who were exposed who need to be in isolation. One of the new cases is a health-care worker at the Dufferin Care Centre, a long term care home in Coquitlam.

Over the past week, B.C.'s health officials have imposed dramatic new measures in an attempt to curb the spread of the virus, including banning gatherings of more than 50 people and closing all public schools, bars and clubs.

Henry says at least four of the latest cases are connected to a dental conference that was held in Vancouver on March 6 and 7, and that anyone from around the world who attended the event needs to self isolate. Of the 348 cases, 22 are being treated at hospital, 10 are in intensive care units in hospital, and 6 are reported as fully recovered.

Henry said the province is exploring options for delivering public-health messages to young people who may feel they are not at risk of contracting the disease.

With some people in B.C. failing to comply with the province's requirements around staying home and maintaining physical distance, Dix said the provincial government has the ability to call in peace officers to enforce the provincial health officer's orders, if necessary.

"We're making headway together against this threat, but we're far from prevailing, everybody knows that", he said.

Stewart said many non-essential businesses and services are already limiting the number of people permitted inside, switching to delivery or making the hard decision to close. She says it takes time to gather the testing information, given the timelines associated with the novel coronavirus. "It's in our hands now", said Henry.

"Physical distancing is incredibly important right now for everybody".

"The actions we are taking today make a difference in how we can transfer this disease to others", she said.

"There are still some problems and some concerns and we are still being made aware of those, particularly with young people", she said.

"We also know, as Dr. Henry has said, that you're performing miracles every day".

"Now is the time to stay home as much as possible, and to keep a safe distance from others when outside", she said. People who have travelled overseas do not need to be tested, even if they develop symptoms, but need to self-isolate at home for 14 days.

Brown issues 'stay at home' order, effective immediately
In an executive order issued Monday , Governor Kate Brown ordered Oregonians to stay at home or face the penalty of a misdemeanor. The # of cities, counties, electeds, health care groups, joining me in pushing for this continues to grow. 3/24/2020

Hong Kong to ban all tourist arrivals, may suspend alcohol sales
Hong Kong is banning all tourist arrivals to the global financial center amid a spike in imported cases of the coronavirus . The decision came amid growing pressure from both sides of the political aisle to close entry to non-Hong Kong residents. 3/24/2020

Tesco launches recruitment drive for 20,000 temporary workers
The German supermarket chain said it is looking to fill the positions across its stores and at its massive Nutts Corner warehouse. Thank you to everyone offering to help as we work day and night to keep our shelves full for customers. 3/24/2020

League season suspended due to coronavirus pandemic, joins AFL, NRL
He remained optimistic the season could resume and said the postponement likely was "heartbreaking" for players, clubs and fans. All soccer in Australia from community to professional level has now been halted. "We will feel this", Johnson said. 3/24/2020

Economic Stimulus Bill Fails Key Procedural Vote in US Senate
The action on the package was blocked by the Democrats, falling short of getting the required 60 votes. This is a developing story and will be updated. 3/24/2020

Britain's armed forces to distribute protective equipment to United Kingdom doctors
Johnson He advised the British to work from home if possible and ordered the closing of pubs, gyms and entertainment centers. Health secretary Matt Hancock has promised that the government was taking the issue "very seriously". 3/24/2020

British children join exercise lesson from home
As well as tens of thousands of families in the United Kingdom , people tuned in from as far as Brazil, Jamaica and Canada. 3/24/2020

Nigeria Warns against using chloroquine to treat coronavirus
Meanwhile, many people across the USA have praised the drug and credited it with saving their lives - albeit after they were prescribed it by doctors. 3/24/2020

Bruins' Rask: Retiring after contract expires 'a possibility'
Rask ranks first among goaltenders with a 2.12 goals-against average and second with a.929 save percentage this season. The 2014 Vezina Trophy victor has suited up in 536 games since debuting during the 2007-08 season. 3/24/2020