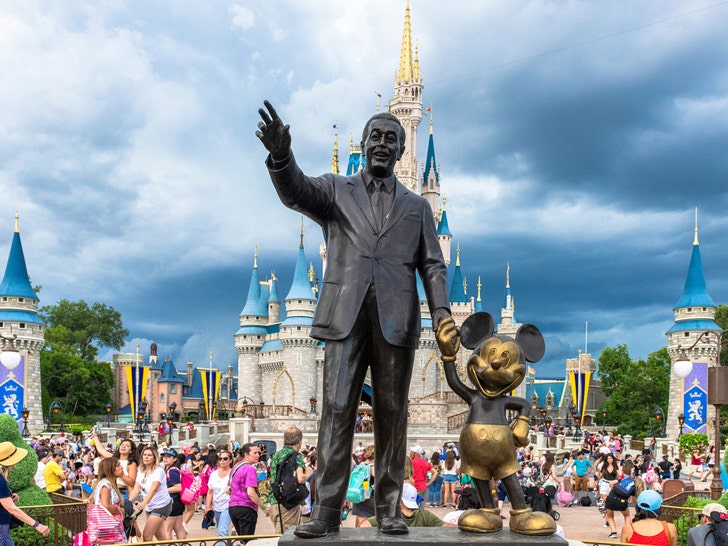 A 34-year-old California man who died from the coronavirus visited Disney World just days before his death.

Ghazarian's sister told TMZ, "He suffered a lot and put up a good fight".

TMZ reported that Ghazarian began to develop a cough on March 7, and the next day, he coughed up blood.

Ghazarian reportedly traveled from Los Angeles to Orlando on March 2 for a business trip and opted to spend a couple of days visiting the high-traffic theme parks with his friends. He had visited Walt Disney World on March 2.

He returned to Los Angeles International Airport on March 9 and immediately went to the emergency room, where he also had a high fever. The family told TMZ that a chest x-ray confirmed Ghazarian had pneumonia, and he was tested for COVID-19 and sent home with fluids and antibiotics and instructed to self-quarantine until he got the results back. "We will miss our Jeff every day, but we are thankful for all the fun, happy memories of the times we had together".

On March 13, the results of his test came back positive for the coronavirus.

On March 14, Jeff was rushed to the hospital by ambulance; he was transferred to the ICU after it was discovered his lungs were 60-70 percent blocked with pneumonia.

Doctors sedated and intubated him, but the ventilator failed to help his lungs heal, and he passed five days later.

Ghazarian had a medical history that could have made him more susceptible to the virus, including asthma, childhood bronchitis, and testicular cancer, which he beat back in 2016, according to the report.

Sadly - and despite the family claiming he was approved for antiviral meds - he took a turn for the worse and never got the medication in time ... and passed away Thursday morning. Follow CDC guidelines and Orange County advisories on staying safe.

Australia economy to get a $56 billion coronavirus protection injection
The government last week announced a 17.6 billion Australian dollar ($11.4 billion) economic stimulus package. The Aussie dollar bounced on the announcement, jumping from a near 18-year low of US55.41¢ to US55.82¢. 3/20/2020

Local health unit reports Ontario's second COVID-19 death as cases spike
The death, an elderly man, is the ninth in Canada related to COVID-19, including seven in B.C. and one in Ontario. Bonnie Henry declared a public health emergency in B.C. along with three more deaths due to COVID-19. 3/20/2020

Racing set to go behind closed doors
The Grand National race, scheduled for April 4, is the main event during the annual three-day Grand National festival in Aintree. Details of backup strategies have actually been shown the Department for Digital, Culture, Media as well as Sport. 3/20/2020

National Basketball Association advised it might not resume until June
According to reports, the changes could also include a reduction in the duration of the playoff series. If you're missing live sports, there's still plenty of content. 3/20/2020

India hangs four men over 2012 Delhi bus gang-rape, murder
The men were executed at dawn in Tihar Jail, on the outskirts of the capital, four television news channels reported. May 5, 2017 - India's Supreme Court upholds the death penalty of the four remaining convicts. 3/20/2020

California governor issues statewide 'stay at home' order over coronavirus
About half of the state's population are already subject to similar stringent measures, including the city of San Francisco. The order goes into effect Thursday night and asks residents not to leave their homes except when necessary. 3/20/2020

Australia Shut Borders From 9PM Tonight
Earlier this week, the government announced all Australians now overseas should return home immediately, using commercial flights. Prime Minister Scott Morrison has announced that all non-residents and citizens will be banned from entering Australia on Friday. 3/20/2020

India's PM Modi orders one-day nationwide curfew to combat virus
Similarly, all children below 10 have been advised to remain at home and not venture out. The government says there have been 173 infections and four deaths from the virus. 3/20/2020

Trump approves chloroquine for coronavirus treatment in US
When it was released half-a-century ago, the malaria drug was hailed for having milder side effects than its predecessor. Janet Diaz of the World Health Organization said "there is no proof that that is an effective treatment at this time". 3/20/2020

AUD/USD Price Forecast - Australian Dollar Hits Major Level
The Australian dollar has completely collapsed during trading on Friday, after initially trying to recover some of the losses. Regardless of what you do, small position sizing is probably crucial. 3/20/2020

New Yorkers Should Expect Shelter-in-Place Order: Mayor
Missed the most recent top news in New York City? New York City has a total of 326 confirmed cases of the virus and five deaths. As of Tuesday evening, more than 6,300 people in the U.S. had tested positive for COVID-19 and at least 108 people had died. 3/20/2020

Tucker Carlson calls on Richard Burr to resign
It is based on disclosure filings that members of Congress make when they are engaging in significant financial transactions. Even three weeks later, GOP lawmakers and Trump continued to project confidence that the virus's outbreak was being managed. 3/20/2020

NASA Shells Out $4.6 Billion for Six Lockheed Martin Orion Capsules
The long-time government contractor will supply NASA with as many as 12 Orion spacecraft over the coming decade. Under the contract, NASA will order three Orion spacecraft for Artemis missions III through V for $2.7 billion. 3/20/2020

DHS Considering Plan to Turn Away Asylum-Seekers
The United States already sends non-Mexican asylum seekers to that country under a program known as the Migrant Protection Protocols (MPP). 3/20/2020