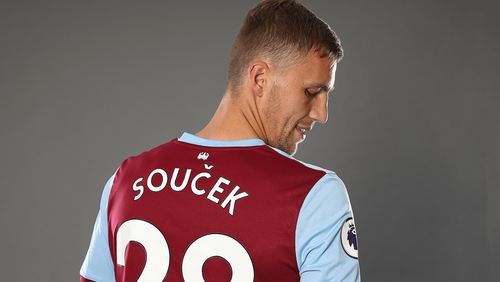 Speaking about Soucek, who will cost in the region of £13million, Hammers boss David Moyes said: 'I think he gives us a lot of different aspects but more importantly he fits the profile of the player I want to bring to West Ham.

The Czech Republic global joins from Slavia Prague and the Hammers have the option to make the deal permanent in the summer.

They are moving for a number of players, with multiple irons in the fire, and are pushing for Celtic midfielder Ntcham.

The 22-year-old only joined Red Bull from Ajax last summer for £4million and West Ham are prepared to give Salzburg a quick profit on the Denmark U21 global.

The midfielder could now be set to head back to England, where he spent time on the books at Manchester City, to join West Ham's battle for survival.

West Ham have other options and are also in talks with Pape Cheikh Diop.

Reports in France claim the Hammers are also in talks with Pape Cheikh Diop, who is now on loan at Celta Vigo from Lyon.