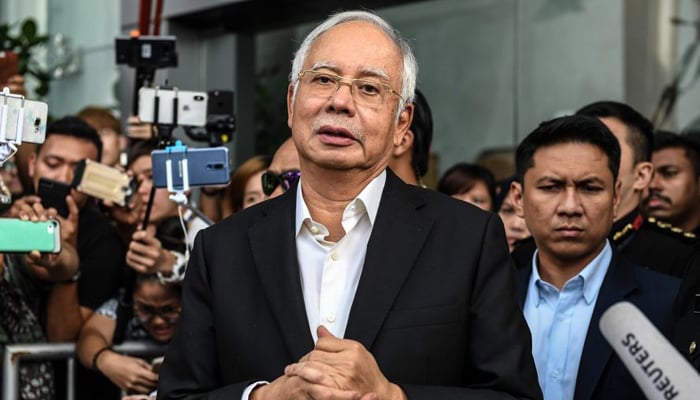 Former Malaysian leader Najib Razak insisted he was not the architect of the 1MDB scandal as took the stand to defend his conduct on Tuesday, as the first of several trials linked to the multi-billion-dollar fraud entered a crucial stage.

He has since been arrested and hit with dozens of charges linked to the looting of the investment vehicle.

What is the 1MDB scandal?

His testimony, in a question and answer format, began with how he set up the 1MDB infrastructure fund in 2009 and how the fugitive Malaysian financier Jho Low, said to be at the centre of the scandal, came to be associated with the fund.

"The crux of my defence is the entire scheme is designed by Jho Low", Shafee added.

Najib is accused of illegally receiving 42 million ringgits ($10 million) from former 1MDB unit SRC International and was ordered to present his defense in November after a judge ruled prosecutors had successfully established a case against him.

"[Low] portrayed himself as someone influential in the Middle East countries who I believed was able to facilitate investments and partnerships between them", Najib said, speaking calmly and deliberately to a packed courtroom.

Najib arrived at the court in a blue suit and held a brief Muslim prayer with supporters at the building's steps. The trial will resume Wednesday.

Najib is facing four charges of corruption and three counts of money-laundering in the trial.

If convicted, Najib, 66, could face hefty fines and jail terms ranging from 15 to 20 years on each charge.

Prosecutors have argued that Najib wielded huge influence over the unit and knew that stolen money was being funneled from it into his accounts.

But Najib told the court: "I, in an absolute and unequivocal manner, like to state that I do not have any personal interest in SRC, except in a professional manner as the prime minister and minister of finance and in the interest of the public".

In an opening statement in court before Najib took the stand, Shafee said he will prove that Najib "did not misappropriate funds. either directly or indirectly" and "did not act dishonestly".

The US Department of Justice has said about $4.5 billion siphoned from 1MDB was used by Low and his associates to buy a yacht, a private jet, as well as Picasso paintings, jewelery, and real estate. The biggest opened in August, centering on allegations he illicitly obtained over 500 million USA dollars from the fund.

United States authorities who are also investigating the fraud, as money was allegedly laundered through the American financial system, believe $4.5 billion was looted from the fund.