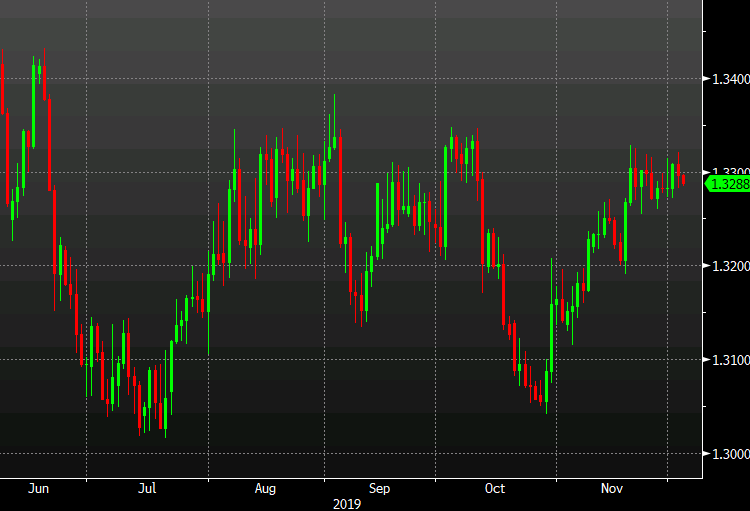 The central bank's overnight rate target has been set at 1.75 per cent since October of a year ago. There is nascent evidence that the global economy is stabilizing, with growth still expected to edge higher over the next couple of years.

A resilient Canadian economy has allowed the Bank of Canada to keep interest rates on hold even as its worldwide peers have moved to ease monetary policy as the global economy has shown signs of slowing.

The Bank of Canada struck an upbeat tone Wednesday, citing evidence of a stabilizing global economy and a resilient domestic backdrop that gives little indication policy makers are in a rush to lower borrowing costs.

Even so, the central bank has warned that this resilience will be tested by persistent global trade conflicts and uncertainty.

Canadian government bond prices were higher across a flatter yield curve in sympathy with U.S. Treasuries.

All 27 economists surveyed by Bloomberg expected the Bank of Canada to hold rates steady on Wednesday, though many see the bank eventually cutting borrowing costs as early as the first quarter next year.

Analysts characterized the statement as less dovish than the previous statement in October, when the central bank highlighted global risks and Poloz acknowledged the central bank had considered the merits of an insurance cut. Financial markets have been supported by central bank actions and waning recession concerns, while being buffeted by news on the trade front.

Economic growth in Canada slowed to an annual pace of 1.3 per cent in the third quarter, in line with what the central bank forecast, but the Bank of Canada noted investment spending was stronger than expected. The Bank Rate is correspondingly 2 percent and the deposit rate is 1 ½ percent. Housing investment was also a source of strength, supported by population growth and low mortgage rates. Policy makers, who had expected a decline in capital spending in the second half, said they will assess the extent to which the pickup "points to renewed momentum" in investment. The Bank continues to monitor the evolution of financial vulnerabilities related to the household sector. Inflation will increase temporarily in the coming months due to year-over-year movements in gasoline prices.