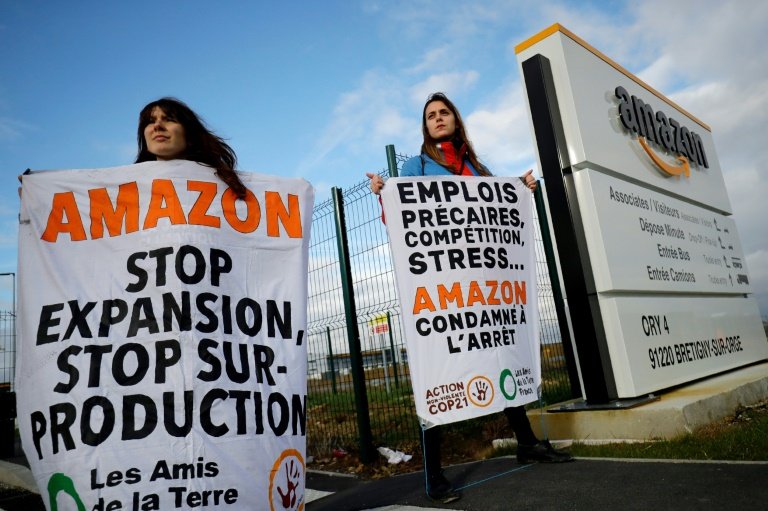 Many French activists hindered an Amazon distribution center south of Paris in a Black Friday-enlivened dissent, in the midst of expanded resistance to the post-Thanksgiving deals marvel that has seen a gathering of French legislators push to boycott it by and large.

The protest took place on the eve of the Black Friday sales, a tradition that originated in the USA on the day after Thanksgiving but has gone global in the past few years. Some French lawmakers need to ban Black Friday, which has morphed into a worldwide phenomenon regardless that it stems from a particular USA vacation: Thanksgiving Thursday. A legislative committee passed an amendment Monday that proposes prohibiting Black Friday since it causes "resource waste" and "overconsumption". Other critics say it hurts small businesses. "We will not betray our children for a 30% discount!" reads a manifesto by groups holding "Block Friday" protests around Paris.

In Britain, where the big winter sales have traditionally been held on the day after Christmas, companies have adopted Black Friday marketing campaigns since about 2010.

Research by a United Kingdom consumer association found that 61% of goods advertised in Black Friday deals previous year were cheaper or about the same price both before and after the event. Russia's consumer watchdog published detailed tips on how to avoid getting fooled, like checking whether prices were raised before Friday to make deals look good or whether delivery costs are inflated. The respected weekly Mail & Guardian newspaper decried in a scathing editorial how Black Friday is used to enrich big retailers.

They included that they would bolster Black Friday in the event that it helped little French organizations, however said it for the most part benefits enormous online retailers.

In Italy, for example, Black Friday falls outside the season's strictly defined schedule for when the winter sales can be held. The fashion industry has warned that can hurt smaller retailers in a country that relies on them heavily.

Protesters from climate group Amis de la Terre (Friends of the Earth) spread hay and old refrigerators and microwaves on the driveway leading to the warehouse in Bretigny-sur-Orge on Thursday. France's e-commerce union has condemned it. They held signs before the entryways perusing "Amazon: For the atmosphere, for employments, stop development, stop over-creation!"

The activists were later dislodged by police.