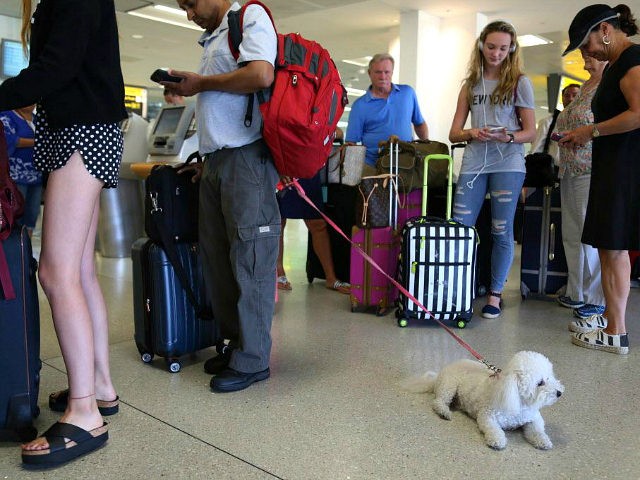 US airlines began changing the rules earlier this year, especially for emotional-support animals, after passengers brought not only dogs and cats but turkeys, goats, snakes and pigs onto planes.

Delta Air Lines is barring emotional-support and service animals that are less than four months old, while banning all support animals from flights longer than eight hours.

Delta says the policy change is in response to an 84 per cent increase since 2016 in incidents involving emotional-support and service animals, including incidents of animals urinating, defecating, and biting passengers or crew members - and one in which a passenger was mauled by an emotional-support dog.

Both types of animals fly for free and are not required to be caged during the flight.

Starting on December 18, passengers traveling on Delta will no longer be able to bring support or service animals under four months old on flights. People who fill out the forms to travel with a support animal avoid pet-carriage fees.

According to the act, airlines can determine if an animal is a service animal through the "verbal assurances of an individual with a disability using the animal, looking for physical indicators such as the presence of a harness or tags, requiring documentation for psychiatric support animals and emotional support animals, and observing the behavior of animals".

Passengers who bought tickets before then and who already requested to travel with an emotional support animal will be allowed a grace period to fly as originally planned until a full ban starts February 1.

According to Airlines For America, a trade group that represents major U.S. airlines including American, United, JetBlue, Southwest, and Alaska, the number of emotional-support animals travelling aboard commercial flights jumped 74 per cent, from 481,000 in 2016 to 751,000 in 2017.

Delta said its Reservations and Customer Care teams will contact customers "to adjust reservations if the policy update impacts their travel plans".

The airline says its policy is in line with CDC vaccination requirements and the Air Carrier Access Act (ACAA), which states airlines may exclude animals that "pose a direct threat to the health or safety of others" or "cause a significant disruption of cabin service".

Schumer: Dems Won't Give in to Trump's Wall Demands
Lopez Obrador said Thursday morning that the topic of funding for a border wall was not discussed "in any conversation". López Obrador said in a news conference Thursday that "the conversation was very good, friendly, respectful". 12/13/2018

Miley Cyrus Confirms She's Going to Be in Black Mirror Season 5
Cyrus said the gaggle of animals included seven dogs, two regular-sized horses, two mini-horses, three cats and two pigs. I get deep into the characters I play, just like I do with music. 12/13/2018

Accused Russian Agent Maria Butina Changes Plea, Admits Guilt
Butina, jailed since her arrest in July , had mounted an aggressive defence and tried to have the charges against her tossed. President Trump himself told Reuters on Tuesday that contacts between his aides and Russians in 2016 were " peanut stuff ". 12/13/2018

Russian Fighter Jets in Venezuela Raise Tensions Between Kremlin, US
Russian President Vladimir Putin wearing a jump suit sits in the cockpit of a sleek white Tu-160 bomber in 2005. A pair of jets also visited in 2013. "We are building peace rather than waging war". 12/13/2018

Police respond to threat at Columbine high school
The sheriff's office said that the threat came around 9:20 a.m. claiming that there were explosive devices inside the school. Officials near Denver, Colorado are urging parents to not come and get their children following a multi-school lockdown. 12/13/2018

Eric Berry expected to start vs. Chargers
He finished Sunday's game with eight receptions for 139 yards, including a crucial 48-yard catch on a late fourth-down play. And Phil's job won't be any easier Thursday with bell-cow RB Melvin Gordon likely to miss a third straight game injured. 12/13/2018

Remains found in Long Island basement are homeowner’s father, police confirm
Mike and his three siblings were told by their late mother Dorothy that he had left one day and never returned. Carroll, a Korean War veteran, had been missing since 1961, authorities said. 12/13/2018

Ovie Ejaria removes references to Rangers from social media
However, his manager insists the player is still at the club but admitted the 21-year-old is "unsettled" in Glasgow. Ovie Ejaria didn't travel with the Rangers squad to Vienna. 12/13/2018

NASA Scientists Discover More Glaciers in East Antarctica Are Losing Ice
Earlier it was reported that the Greenland glacier, the second largest on the planet, began to melt at record speed. The glaciologist has been documenting her findings at the Fall Meeting of the American Geophysical Union (AGU ). 12/13/2018

Blurred Lines: Robin Thicke and Pharrell to pay $5m in copyright case
According to the original suit, "the Gaye defendants are claiming ownership of an entire genre, as opposed to a specific work". Going forward, the Gaye family are entitled to a running royalty of half the Blurred Lines songwriter and publishing revenue. 12/13/2018

China Detains Former Canadian Diplomat After Arresting 100 Christians and Their Pastor
Meng's arrest came December 1 in Vancouver at the request of the U.S.as she was in transit, flying between Hong Kong and Mexico. The US State Department has also weighed in, condemning Kovrig's detention, saying it is concerned about the Canadian. 12/13/2018

California Wildfires Costs Rise To Record $11.8B In Payments To Victims
Close to where the damage happened and the suspending transposition jumper, a flash mark was observed on the tower by PG&E. Additionally, it disclosed that a second, smaller power line also experienced an outage around the same time that morning. 12/13/2018