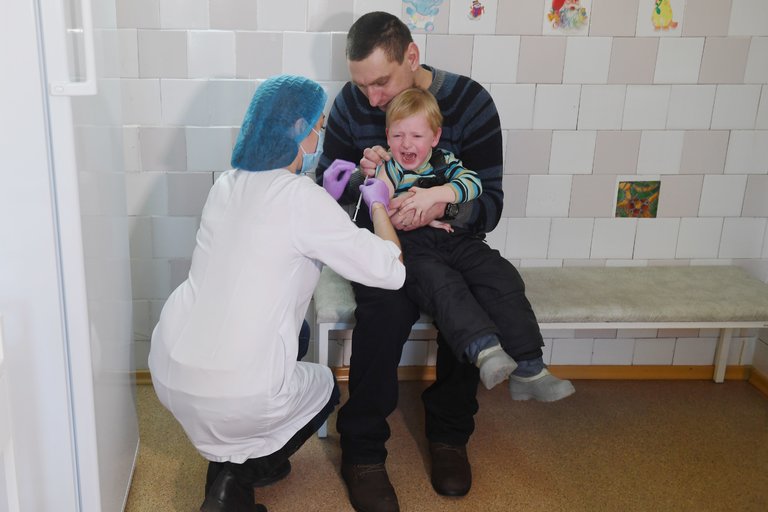 Measles cases have increased by 400% across Europe between 2016 and 2017, according to statistics from the World Health Organization (WHO).

The WHO says there have been declines in overall routine immunisation coverage, as well as consistently low coverage among some marginalised groups and interruptions in vaccine supply or underperforming disease surveillance systems.

Dr Zsuzsanna Jakab, WHO regional director for Europe, described it as "a tragedy we can not accept".

Japan's Foreign Ministry is calling on people to consider getting vaccinated if they plan to visit European countries with a growing number of measles cases.

Measles symptoms include a runny nose, sneezing and cough, sore, red eyes, a high temperature and, after a few days, a red-brown blotchy rash. Measles cases were highest in Romania, Italy and Ukraine.

Last September, it was announced that measles had been officially eradicated in the United Kingdom - meaning it had not freely circulated for three years - thanks to widespread immunisation with the MMR vaccine.

The WHO said 15 countries, including Greece, Germany, and Serbia, confirmed more than 100 patients. The "anti-vax" movement has claimed that vaccinations typically given to newborns and young children may cause serious side-effects; most notably was the development of autism.

"Every new person affected by measles in Europe reminds us that unvaccinated children and adults, regardless of where they live, remain at risk of catching the disease and spreading it to others who may not be able to get vaccinated", Dr Jakab said.

Around 95% of cases of measles happen in low-income countries, and globally the fatality rate of measles is one in five.

Most deaths from measles result from severe complications such as diarrhoea, dehydration, brain inflammation or respiratory infections, according to Medicins Sans Frontiers.

"This short-term setback can not deter us from our commitment to be the generation that frees our children from these diseases once and for all".

Minnesota's Vonn gone from Olympics? Don't bank on it just yet
It had a daunting, steep pitch, which would usually favor a more technically gifted slalom skier like Shiffrin. Shiffrin and Vonn will meet for the first time in an Olympics race during the last individual women's event. 2/23/2018

Khloe Kardashian's ex husband gives his blessing to the pregnant star
She'll be a good mother, for real. 'I was really happy for her, ' he continued. "Khloe has that special glow about her. Speaking to Access Hollywood , the 38-year-old said: 'To tell you the truth, it couldn't happen to a better person. 2/23/2018

Marles: no comment on abusive Vic MP texts
Farrah Tomazin is an Investigative Reporter for The Age , with interests in politics, social justice, and legal affairs. Mr Eren is understood to be prepared to make a statutory declaration, saying there was a knife. 2/23/2018

Lawsuit Looks to Preserve Protections for Immigrants From Haiti, El Salvador
If the lawsuit does not succeed, Haitian immigrants living in the USA under TPS would have to leave the country July 22, 2019. The end of the protections impacts more than 200,000 Salvadorans and 90,000 Haitians in the USA , according to the complaint . 2/23/2018

Tezos Board Reshuffled As Johann Gevers Steps Down
Tezos had been looking to a February release date for the coins, a deadline that now seems within reach. Tezos has been deflecting rumors of an investigation into the company by the U.S. 2/23/2018

China takes over Anbang, prosecutes ex-boss for 'economic crimes'
Wu Xiaohui , who has been removed from his post, was detained by authorities last June. The firm's website claims it has almost 2 trillion yuan ($315 billion) in assets. 2/23/2018

Alabama postpones execution for inmate Doyle Lee Hamm
The court ruled about 9 p.m. that the execution could proceed, after delaying it for three hours to consider the final appeals. Prosecutors said Cunningham was shot in the head while working an overnight shift during a robbery in which $410 was taken. 2/23/2018

Sandra Oh Upsets a Psychopath in 'Killing Eve' Trailer
The show's release date has also been revealed; it will premiere on April 8, as indicated in the intriguing key art below. 2/23/2018

When It Comes to Art, Don't Call Them Neanderthals
By calculating the age of crusts that formed over the paintings, the authors were able to discern minimum ages for the artworks. We have virtually no fossil evidence for Denisovans, so it can not be said that they represent a non-human-like form. 2/23/2018

Devils acquire Rangers goals leader Grabner
They don't have their second or third rounders, but they own Calgary's fifth round pick in addition to their own. The speedy winger with a nose for the net will be an unrestricted free agent in the summer. 2/23/2018

European Central Bank closer to revising stimulus outlook
Despite a rebounding eurozone economy, consumer price inflation remains below the goal of just below 2 percent. LONDON, Feb 22 (Reuters) - The dollar inched up to a 10-day high on Thursday after minutes from the U.S. 2/23/2018

Oakland man missing in Yosemite
Anyone with information or who was in the area of Hetch Hetchy between Saturday and Tuesday should call or text 888-653-0009. We have ground teams out and one of our dog teams out covering the trails that he planned to be on with his permit". 2/23/2018

Mini-tumours' created to battle cancer
Given the replicas are based on a patient's DNA the consequent treatment will be completely personalised. The approach found a drug that had a chance of shrinking a patient's tumour in nearly 9 in 10 cases. 2/23/2018

Russell Westbrook Hits Game-Winning Three in Thunder's Victory Over Kings
But Sacramento held a 90-85 lead after three behind the strong play of Zach Randolph, who finished with 29 points and 12 rebounds. Oklahoma City Thunder fans have reacted by captioning a photo that caught the big Kiwis animated reaction on social media. 2/23/2018