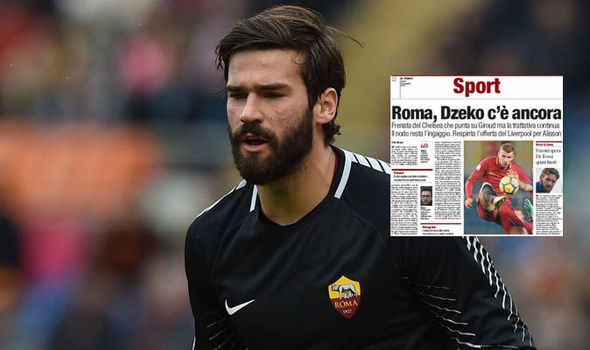 Klopp has realised that Liverpool need a new goalkeeper and has begun his quest for a new no.1 with a bid for AS Roma's Alisson, according to The Mirror's report which cites Italian outlet Il Tiempo.

Reds boss Jurgen Klopp is looking to add a new goalkeeper to his ranks having not been convinced by Simon Mignolet and Loris Karius.

The pair have both consistently made errors this season and have struggled to stamp their authority on the No 1 position.

Il Tempo have an article in their Saturday edition on the great sales at AS Roma, with the Serie A club nearly desperately trying to get some money in before the end of the month.

Roma rejected the bid, telling Liverpool that if they are to prise the Brazilian worldwide away from the Italian capital, it will cost them £44m and that they want to hold on to the goalkeeper until the end of the season at least.

Roma are already fighting to keep hold of two of their stars this window with Edin Dzeko and Emerson Palmieri seemingly set for a move to Chelsea, and do not want to lose another key player amid a battle for Champions League qualification.

'In June, maybe we will speak about it again but for now I am concentrated on Roma.

"Together with my teammates, we have done a great job to not allow the loss of [Wojciech] Szczesny to be felt by the fans".

'I have worked very hard and want to continue along that track'.