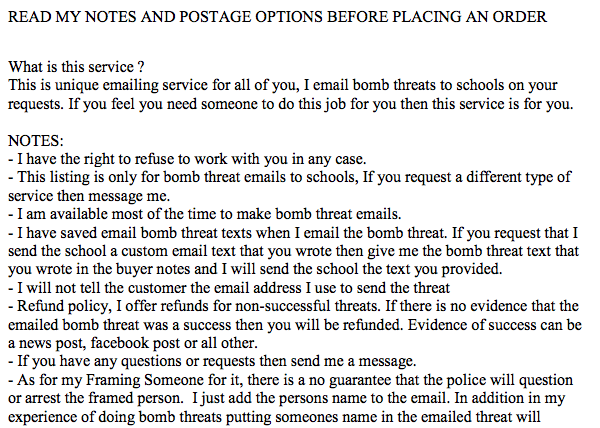 Michael Kadar, a dual American-Israeli citizen, was arrested in March and later charged for his alleged involvement in the wave of bomb and active shooter threats that rattled Jewish community centers, schools and other institutions across the United States and overseas.

Kadar's advertisement indicated he would frame someone else for any bomb threat he made for an additional $15 surcharge and said he would offer a full refund for "non-successful threats".

According to a recently unsealed search warrant for computer servers hosting AlphaBay - the now-shuttered Dark Web market - Kadar allegedly advertised a "Second Email Bomb Threat Service" on the marketplace in which he charged $30 for a bomb threat emailed to a school.

"I email bomb threats to schools on your requests".

"That ongoing investigation has identified a suspect believed to have ordered and paid for at least [sic] of the bomb threats made by Kadar", federal prosecutors explained in one court filing.

Kadar in his post wrote that he could also frame someone as part of his service, but there was "no guarantee that the police will question or arrest the framed person", the affidavit said.

The court documents do not make it clear how much people had purchased Kadar's service. "If you feel you need someone to do this job for you then this service is for you", Kadar posted in March under the username "Darknet_Legend", according to the Federal Bureau of Investigation affidavit. But he faces up to 10 years in prison on the charges in Israel.

The affidavit also gives examples of the threats.

The next day, Kadar's username received a review on AlphaBay by someone who was happy with the service, according to the affidavit.

According to the indictment Kadar, who has dual USA and Israeli citizenship, made threats to 2,000 institutions around the world, including the Israeli Embassy in Washington, D.C., and other Israeli diplomatic missions, schools, malls, police stations, hospitals and airlines.

One user posted feedback for Darknet_Legend on March 9, writing, "Amazing on time and on target. We got evacuated and got the day cut short", the warrant quotes an anonymous user. According to the Atlantic, at least one user review (which obviously can not yet be confirmed as genuine) corresponded to the date of a bomb threat at Rancho Cotate High School in Rohnert Park, California. Organizations such as JCCs, other historical Jewish institutions, and Anti-Defamation League offices were victims to the threats.

Kadar's mother previously told NBC News that her son is autistic and was diagnosed with a brain tumor that effects his cognitive functions. The spree came to an end when police arrested 19-year-old Israeli citizen Michael Kadar in connection with the threats, overcoming various anonymity measures to trace the calls. USA law enforcement said he made the threatening calls from his bedroom.

In a recently unsealed search warrant (first surfaced by researcher Seamus Hughes), police sought access to Kadar's AlphaBay accounts, where he appears to have operated the business.

Trump versus North Korea
It wasn't clear whether the president consulted with key allies, the Pentagon or State Department before making his comment. Trump issued the warning during a briefing on opioid addiction at his golf course in Bedminster, New Jersey. 8/09/2017

Nokia 8 Leaks in Live Images with Benchmark Results
According to PhoneArena , the Nokia 8's front camera will indeed be a selfie expert with a 13-megapixel camera se sensor. The smartphone was spotted on GeekBench last week and now a few live images of the handset leaks online by Slash leaks. 8/09/2017

Woman contracts 'traumatising' infection using dirty makeup brush
With the hospital's help, Ms Wright was able to save her sight and is now warning others to beware. Foundation brushes, blush brushes - you name a brush, and you know you gotta wash it. 8/09/2017

Katrina Kaif finally finds someone who talks more than her
On sets, she chanced upon an old co-star of hers - a young actor with whom she had worked in 2011 film Mere Brother Ki Dulhan . The makers of Tiger Zinda Hai - producers Yash Raj Films and the director Ali Abbas Zafar - are pretty thick with Salman. 8/09/2017

Android 7.0 Nougat update rolling out to Samsung Galaxy A7 (2017)
Check out our detailed coverage on the upcoming Android O and know about its features beforehand. The release of the next version of Android , named Android O or Android 8.0 is around the corner. 8/09/2017