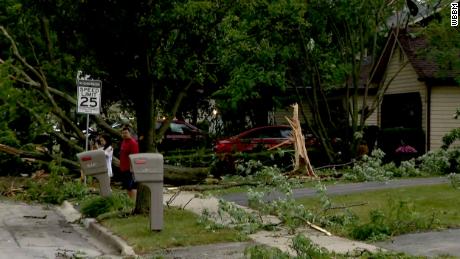 A tornado with strong rotation and a pronounced debris signature on radar was confirmed late Sunday in suburban Chicago, forecasters said.

At least five people were injured, including one critically, and a dozen homes were damaged in a possible tornado outbreak in IL on Sunday, officials said.

The tornado touched down near route 53/75th street in Woodridge, DuPage County, around 11pm ET on Sunday.

Five people were taken to the hospital, including one in critical condition and four others who sustained minor injuries, according to Naperville Director of Communications Linda LaCloche.

"Gov. J.B. Pritzker echoed that in a tweet, saying "(Sunday night's) tornadoes in the suburbs near Chicago were a reminder to prepare ahead of time for severe weather. "Severe T-storm Watch remains in effect for a bit longer for Will, Kankakee, Ford, Iroquois, and northwest in counties", NWS Chicago said on Twitter.