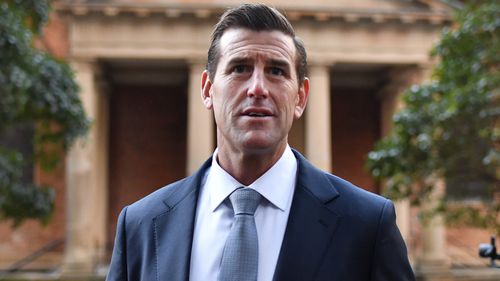 He is seeking damages in Australia's Federal Court from Nine Entertainment Co. and three journalists.

Bruce McClintock, Mr Roberts-Smith's lawyer, told the court his client's reputation had been destroyed by "corrosive jealousy" and "bitter people" who had run a "poisonous campaign against him".

Earlier, Mr McClintock said Mr Roberts-Smith was a courageous, highly organised and disciplined leader who risked his life in battle in Afghanistan in line with the SAS motto of "Who Dares Wins".

He told the court Australia is a country which prides itself on its military prowess, but behind that was the fact "war is violent".

The "Breaker Morant defense" described by AFR boils down to arguing that civilians with incomplete or false information are second-guessing the hard actions taken by soldiers involved in a brutal struggle against an enemy that blends into civilian populations and prefers to attack by ambush and terrorism.

"We are very proud of him for the father and son that he is".

McClintock read from Roberts-Smith's official citation for his Victoria Cross which commended him for "selfless valor" during an intense firefight in Kandahar province in 2010 while "showing total disregard for his own safety".

"It's the kind of thing that would be said by an ostentatious psychopath", Mr McClintock said.

The barrister said Mr Roberts-Smith was absolutely not that. In another incident, Roberts-Smith and other soldiers were accused of killing an Afghan man and then drinking beer out of his prosthetic leg.

Roberts-Smith filed his libel suit soon after the publication of these articles, denouncing their allegations as "false", "baseless", and "completely without any foundation in the truth". Roberts-Smith claims the incidents in which he was portrayed as mercilessly executing helpless prisoners were actually combat fatalities incurred while he was engaging armed and hostile enemies.

McClintock said some of the lurid material used against Roberts-Smith by the newspapers was given to them by soldiers who were "confused, mistaken, or have false memories" due to the "almost inhumane" demands made on them during their Afghanistan deployments.

Mr McClintock said it was "outrageous" for a media company to make an allegation like that and then withdraw it with a "blithe wave of the hand" a month before the trial.

He asked for the highest amount of aggravated damages ever awarded in Australia.

Nine newspapers published a story claiming Mr Roberts-Smith argued with the woman after the function and was angry with her out of fear she had exposed their affair.

Mr Roberts-Smith, through his legal team, denies he punched the woman after they returned to their hotel because her behaviour had threatened to expose their tryst.

Mr McClintock said his client had been separated from his wife when they were together.

He also said the leg was taken home by another soldier and in the scheme of human wickedness, that was not awful.

"This allegation of domestic violence is false".

He said by 2014 other soldiers had developed "enormous jealousy" of Mr Roberts-Smith and his awards.

He was a soldier who "deservedly had a high reputation of courage, skill and decency".

A notice board in the SAS base, Mr McClintock said, had "BRS is after another medal" scrawled on it after Mr Roberts-Smith returned from a mission.

Mr McClintock said that was exactly where Person 17 had been injured when she fell and Mr Roberts-Smith had not hit her.

More than 60 witnesses are expected to give evidence during the lengthy battle between Ben Roberts-Smith and Nine.