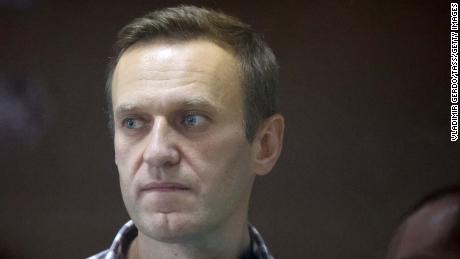 The health of Kremlin critic Alexei Navalny is deteriorating as he keeps up his hunger strike in prison, with a new numbness in his hands, his lawyers said today.

Doctors demanding Russian opposition leader Alexei Navalny be given proper medical treatment were detained on Tuesday outside the penal colony in which he is now being held.

President Vladimir Putin that month complained about the growing influence of large technology companies that he said are competing with states.

Navalny has since last Wednesday been on a hunger strike he started over what he said was a lack of access to a doctor after experiencing worsening pain in his back and legs.

Navalny was arrested in January after returning from Germany, where he spent months recovering from a poisoning attack with Novichok nerve agent he blames on the Kremlin.

The Moscow court - which imposed the fine - said on its Telegram channel TikTok was found guilty of failing to remove information that violates Russian law and sentenced to an administrative fine of 2.6 million rubles, or approximately Rs5.2 million. Russian authorities have rejected the accusation.

On Friday, 30 human rights defenders signed a letter to Russia's human rights commissioner, Tatyana Moskalkova, asking her to visit Navalny in the penal colony because "one gets the impression that he is being slowly killed there".

Prison authorities say his condition is satisfactory and he has been provided with all necessary medical care, but no imprisoned person can expect any special treatment.

"He has lost a lot of weight, plus he has a strong cough and a temperature of [100.6F]", Mikhailova said.

On Monday, he said as many as three people from his unit had been taken to hospital with tuberculosis recently, a claim the Russian prison service denied.

She said she had applied for a meeting with the head of the prison, however the security in front of the prison did not allow her to meet Mr Navalny or the local medical staff.

Half of Levada's respondents aged 18 to 24 said Navalny was imprisoned unjustly, compared with 19% of those aged 55 and over.