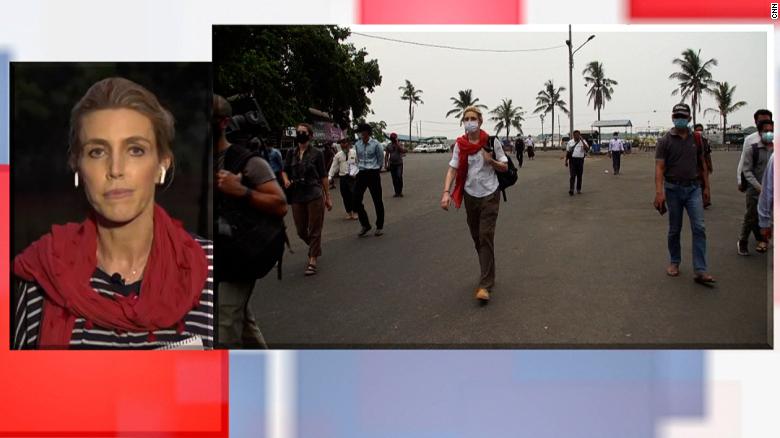 In the South-East Asian country's biggest city of Yangon, protesters marched through streets chanting protest songs and handing out eggs with the slogan "Spring Revolution", a local name for the massive outpouring of opposition to the February 1 coup. There, they were approached by residents who wished to be interviewed, including two women flashing the three-finger salute, which has become a symbol of the protest movement against the military junta.

In Mandalay, the country's second largest city, protestors gathered at dawn on motorbikes to shout their defiance of the power grab that overthrew the democratically elected government.

The Assistance Association for Political Prisoners (AAPP), an activist group monitoring casualties and arrests, said Myanmar's death toll had risen to 557 as of late Saturday. It said Sunday that 2,658 people were now detained or had been sentenced.

Dr. Sasa, the Myanmar special envoy to the United Nations who goes by one name, posted an image of painted eggs on Twitter and wrote that Myanmar's people have a "great future in federal democracy", reflecting hopes for the military to step down and reinstate a democratic system.

Young people in the main city of Yangon handed out eggs bearing the protest messages but their "Easter Egg Strike" met with resistance from security forces, who shot and killed at least three men.

Security forces have continued to spread fear among ordinary citizens.

At other times, soldiers and police keep up their intimidation at night with raids on neighbourhoods, during which they shout abuse, shoot at random, make arrests and vandalise property.

Yesterday, police opened fire killing several protestors in Monywa in central Myanmar and elsewhere. Access to mobile networks and all wireless - the less costly options used by most people in the developing country - remained blocked on Sunday.