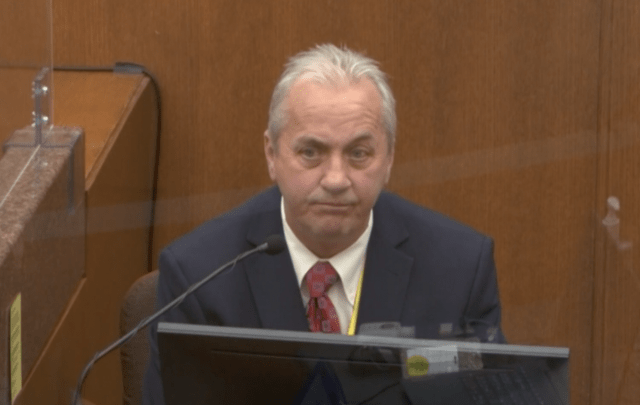 On the day of George Floyd's death, Derek Chauvin called Sgt. Pleoger after kneeling on Floyd's neck for more than 9 minutes, asking him to come out to the scene. Lt. Richard Zimmerman, a 36-year veteran who runs the department's homicide unit, told the court that putting a knee on George Floyd's neck, as the former officer did, once the suspect had been handcuffed was "totally unnecessary", the Star Tribune reports. A knee on the neck "can kill them", the lieutenant testified.

Chauvin, who is white, was sacked by the city's police department the day after he was captured on video on top of a handcuffed Floyd as the 46-year-old Black man was dying.

He warned of the dangers of leaving a person in a prone position. Officers had been arresting Floyd for allegedly tendering a counterfeit $20 bill; a crowd of bystanders formed.

Zimmerman agreed with Nelson that a person who is handcuffed can still pose a threat and can continue to thrash around. He said the officers could have ended their restraint of Floyd after he stopped resisting.

Richard Zimmerman testified Friday that a knee on the neck was deadly force.

One officer asked twice if they should roll Floyd on his side to aid his breathing, and later said calmly that he thought Floyd was passing out.

One of them, Derek Smith, testified that he checked for a pulse and could not detect one: "In layman's terms?" An autopsy found fentanyl and methamphetamine in his system.

Under cross examination, Chauvin's lawyer Eric Nelson asked Mr Zimmerman about use of force - pointing out that officers must consider the entire situation when deciding about whether to use force. "I saw no reason why the officers felt they were in danger, if that's what they felt, and that's what they would have to feel in order to use that kind of force".

"Chauvin's actions were examples of bad policing and poor training that directly caused George Floyd's death, in my opinion", he said.

Nonetheless, Nelson maintained his theme that bystanders created a unsafe environment and diverted officers' attention from Floyd. The prosecution, however, noted that officers on the scene did not call for backup. "They're cuffed. How can they really hurt you, you know?"

After the incident, the trial of Chauvin, who was sacked from the police force, kept America's racial reckoning front and centre of U.S. politics as new vote-restriction laws were introduced in state capitals. The since-fired Chauvin is charged with murder and manslaughter, and most serious charge him carries up to 40 years in prison.