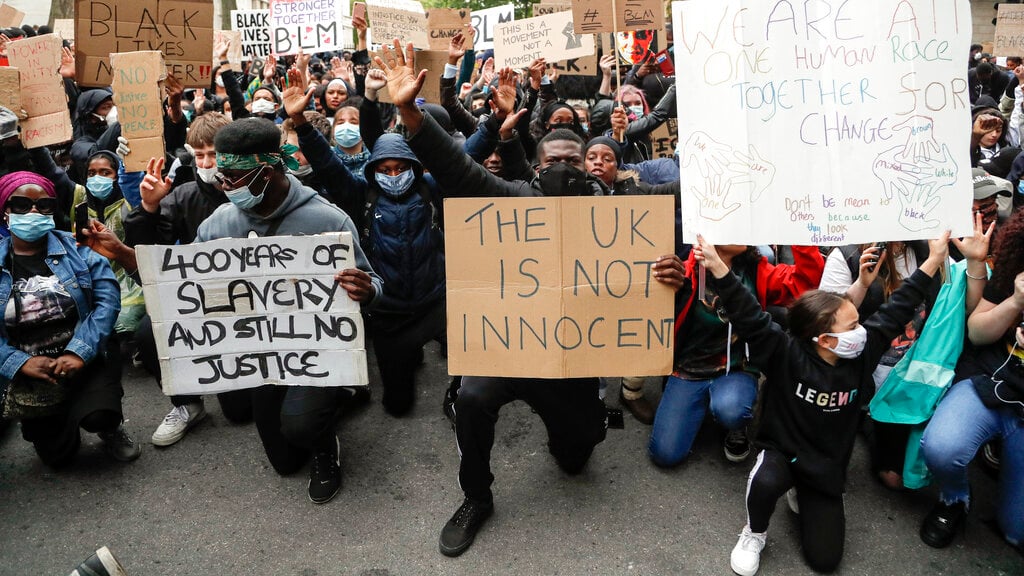 A highly anticipated report from a commission set up by the United Kingdom government to look into racial disparities in the country has been described as a "whitewash" by campaigners after it stated that there is no evidence that the United Kingdom is institutionally racist.

In fact, the United Kingdom "should be regarded as a model for other White-majority countries", the summary added, pointing to shrinking ethnicity pay gaps and success of some ethnic minority groups in education and "to a lesser extent, the economy". "Instead, we have a divisive polemic which cherry picks statistics".

A short summary of the report, commissioned in the wake of the Black Lives Matter (BLM) protests last summer, was shared to the press ahead of its full release on Wednesday.

Speaking to Sky News about the report, Labour's shadow justice secretary David Lammy said: "The problem is there are vast differences across and within ethnic minority groups here in the United Kingdom".

In his foreword to the report chairman Tony Sewell, an education consultant and ex-charity boss, said while the "impediments and disparities do exist", it continued, they were "varied and ironically very few of them are directly to do with racism".

While Labour has accused the government of downplaying institutional racism.

It stated that "the concept of racism has become much more fluid, extending from overt hostility and exclusion to unconscious bias and microaggressions" because "ethnic minorities have higher expectations of equal treatment".

"The government must urgently explain how they came to publish content, which glorifies the slave trade and immediately disassociate themselves from these remarks", Shadow Women and Equalities Secretary de Cordova said.

It also suggested: "There is a new story about the Caribbean experience which speaks to the slave period not only being about profit and suffering but how culturally African people transformed themselves into a re-modelled African/Britain". But Sewell said the report had concluded ethnic minorities were doing "fairly well" in areas like education and employment relative to the white population. "Tell the black young mother that the United Kingdom is not institutionally racist, tell that to the 60 percent of NHS (National Health Service) doctors and nurses who died from Covid and were black and ethnic minority workers", it tweeted.

The commission argued there is a "strident form of anti-racism thinking that seeks to explain all minority disadvantage through the prism of white discrimination" diverting attention from "other reasons for minority success and failure".

It criticised the "confusing" way the term "institutional racism" has been applied, saying this should only be used when deep-seated, systemic racism is proved and not as a "catch-all" phrase for any microaggression.

Black people in England and Wales are nine times more likely to be imprisoned than their white peers, it said.

The commission set out 24 recommendations in the document, "designed to remove obstacles for everyone", grouped around four themes identified as: building trust; promoting fairness; creating agency; and achieving inclusivity.

It argued that unconscious bias training should be scrapped in favour of sponsorship and skills training, and that all companies now publishing their ethnicity pay gap figures should break the reported data up by ethnic group.

Her colleague David Lammy, who led a review on racial bias in the justice system, tweeted that Britain's black community was being "gaslighted" and said he was "tired of the endless debate about whether structural racism exists with little desire to actually address it".

But unions have said it ignores black and ethnic minority people's concerns. "But, on the other hand, there's a reluctance to accept that that's structural".