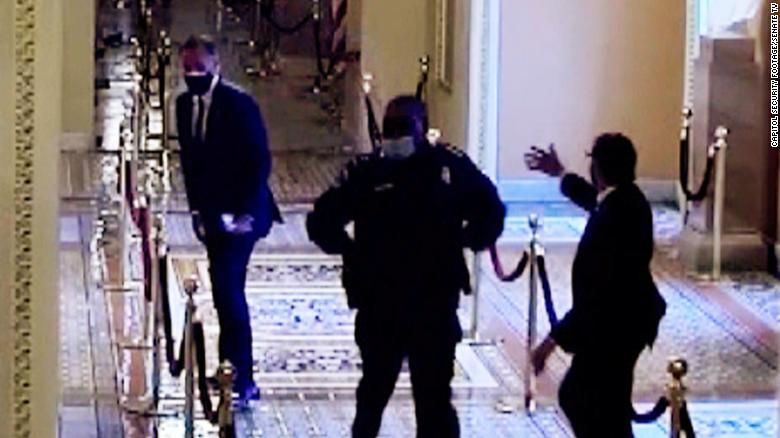 The Senate has voted to give the Congressional Gold Medal to Eugene Goodman, a Capitol Police officer who led a violent mob away from the Senate doors on 6 January as they hunted for lawmakers during the presidential electoral count.

The Senate voted to award Goodman the medal - the highest honor Congress can bestow - by unanimous consent, meaning there were no objections. "Here in this trial we saw new video, powerful video, showing calmness under pressure, his courage the line of duty and his foresight in the midst of chaos and the willingness to make himself a target of the mob's rage so that others might reach safety". Lawmakers burst into a standing ovation for him. Goodman joined the second round of applause.

"In the face of lawlessness, the officers of the US Capitol lived out the fullest sense of their oaths", said Minority Leader Mitch McConnell.

Officer Goodman became a national hero after video shot by Huffington Post reporter Igor Bobic showed his response to rioters climbing the stairs near an entrance to the US Senate chamber.

Pelosi lauded Capitol Police Officer Eugene Goodman, who was seen in the new footage diverting the rioters from entering the Senate chamber and alerting Sen.

The legislation comes after another video of Officer Goodman's heroism during the riots was made public during the impeachment trial of former-president Donald Trump.

Asked about the video in which Officer Goodman tells Mr Romney to turn around, the senator said he did not know the identity of the officer until footage was shown during the impeachment trial.

US House of Representatives Speaker Nancy Pelosi introduced a bill on Thursday that would award the Congressional Gold Medal to members of the Capitol Police force and to Washington's Metropolitan Police Department, whose officers were also called to the scene to secure the Capitol complex.

Goodman was swarmed by appreciative senators as they left the chamber after a long day hearing from Trump's defence team and posing questions to both sides.

The House impeachment managers are trying to tie Trump's actions, including his refusal to accept the results of the November election, directly to the actions by a mob of his supporters who ransacked the Capitol.