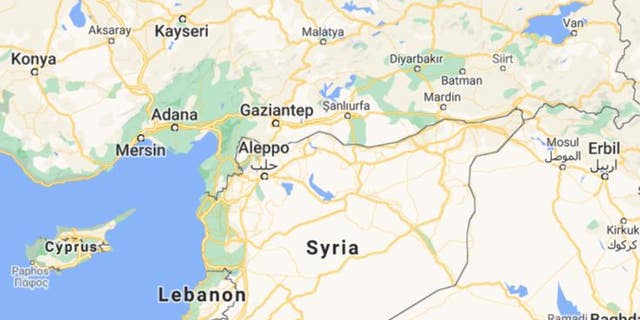 Israel has been stepping up strikes against Iranian targets in Syria, part of aggressive posture adopted before President-elect Joe Biden takes office next week in what could bring a reassessment of Trump's "maximum pressure" policy on Iran.

The chief of staff of the Israel Defense Forces (IDF), Gen Aviv Kochavi, told Israeli media last month that it had struck more than 500 targets during 2020 "on all fronts, in addition to multiple clandestine missions".

The report said that Israel must continue its operations to weaken pro-Iranian forces and prevent their entrenchment in Syria.

U.S. soldiers in a Bradley tank patrol an area near Syria's north-eastern Semalka border crossing with Iraq's Kurdish autonomous territory, January 12, 2021. At least 57 fighters were killed and dozens were wounded, according to a Syrian opposition war monitoring group.

The London-based Syrian Observatory for Human Rights reported Wednesday morning about intense Israeli raids that targeted military sites of the Syrian regime forces and Iranian militias in Deir Ezzor, on the Syrian border with Iraq.

Forces linked to Hezbollah and the Fatemiyoun Brigade, an Afghan Shia militia, operated in the areas that were attacked, it added.

Al-Alam, an Arabic news channel broadcasting from Iran and owned by the state, reported that more than 18 sites had been targeted.

The Associated Press cited a senior US intelligence official with knowledge of the attacks as saying the strikes targeted warehouses being used to store and stage Iranian weapons, and that they were done with intelligence provided by the United States.

The official claimed the warehouses also served as a pipeline for components that support Iran's nuclear programme, AP said.

Russia's Nezavisimaya Gazeta reported Monday on Israeli preparations for an armed conflict on the border with Syria in 2021. Israel will work on easing the danger of the possible return to the bad deal, they said.

Israel is reported to have carried out three other rounds of air strikes in Syria in the past fortnight, hitting facilities, depots and positions in the southern and western outskirts of Damascus and in the Golan Heights.

Observatory head Rami Abdul Rahman called the Israeli raids the "deadliest since June 2018" when strikes on the same region killed at least 55 pro-government fighters, including Iraqis as well as Syrians.

Many fear retaliation for the US killing of Iran's Revolutionary Guard commander Qassem Soleimani previous year in Baghdad may come before Trump leaves office, or that conflict could erupt to scuttle efforts by Joe Biden's incoming administration to negotiate with Iran.

Coronavirus: PM says United Kingdom 'taking steps' over Brazil variant
The Labour leader, Sir Keir Starmer has asked why Boris Johnson was "slow to act" as during December infections surged. The Labour leader told MPs in the the House of Commons, that the current lockdown in England is not "strong enough". 1/14/2021

George Paton agrees to six-year deal as new Broncos general manager
Paton will have final say on the draft, free agency and the roster, per Elway's January 4 statement. A decision about the plan at quarterback also is among the front-burner issues for the Broncos. 1/14/2021

Confusing but helpful- northern Ontario reacts to province's stay-at-home order
Deaths in long-term care homes have hit 1,100 deaths and are expected to surpass 1,800 deaths experienced in the first wave. There are more than 400 patients in intensive care units across the province and surgeries are being cancelled, he said. 1/13/2021

Climate change: USA emissions in 2020 in biggest fall since WWII
Under the 2009 Copenhagen Accord, the United States pledged that by 2020, it will have cut its emissions by 17% from 2005 levels. Greenhouse emissions in the United States fell by over 10.3 per cent in 2020, marking the largest drop drop after World War II. 1/13/2021