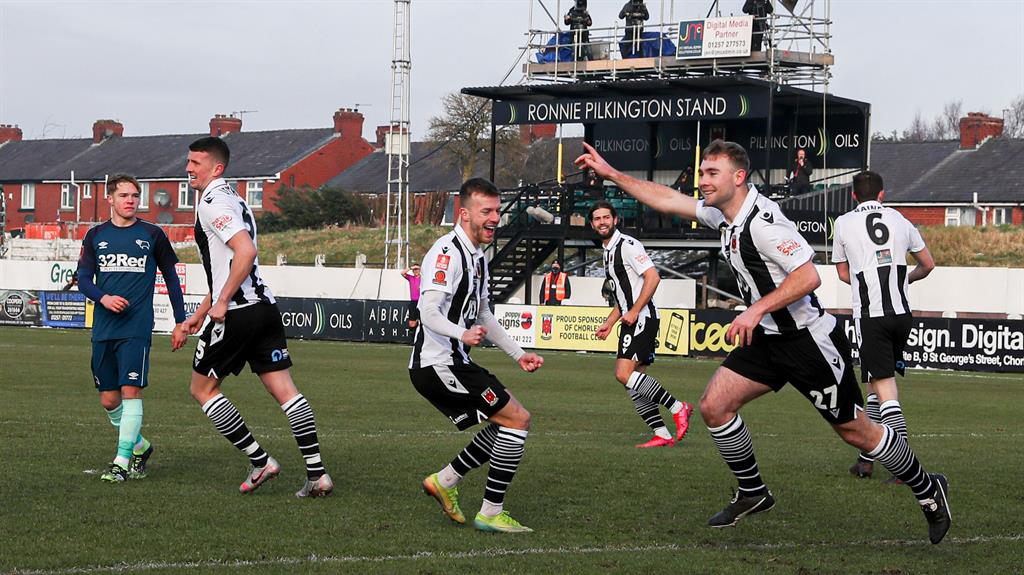 Connor Hall and Mike Calveley were on target as Chorley won 2-0 against Derby, who were forced to play their youth team after a coronavirus outbreak, on a freezing afternoon in Lancashire.

'I'm ecstatic. It's a really proud moment for me and the club.

There are growing concerns over whether the English season should be halted as the new Covid-19 variant wreaks havoc.

Liverpool beat virus-plagued Aston Villa 4-1 on Saturday (AEDT), with its opponents missing the entire first-team squad and boss Dean Smith because of a COVID outbreak.

Southampton's third-round tie against Shrewsbury on Sunday has been postponed after several positive tests at the League One team.

A record-high 40 positive tests were detected among top-flight players and staff in the week between December 28 and January 3 and four Premier League games have already been postponed this term.

Newcastle boss Steve Bruce and Leeds manager Marcelo Bielsa claim there is a moral argument to suspend all matches with the United Kingdom death toll from the virus reaching a new high this week with 1,325 deaths reported on Friday alone.

Everton manager Carlo Ancelotti made eight changes and Turkish striker Cenk Tosun, making his first start in over a year, scored his first Toffees goal since November 2019 in the ninth minute.

Everton meanwhile needed extra-time to get over the line against Championship side Rotherham at Goodison Park.

But three minutes into extra time the Premier League side got the decisive goal when substitute Doucoure latched onto Colombia playmaker James Rodriguez's precise through ball before sliding it past helpless goalkeeper Jamal Blackman.

Premier League basement side Sheffield United celebrated their first win in all competitions in six months by coming out on top in a five-goal thriller at Bristol Rovers.

Burnley edged past third-tier Milton Keynes Dons 4-3 on penalties after Matej Vydra's stoppage-time equaliser for the Clarets rescued a 1-1 draw.

James Justin's sublime curling shot from the edge of the box found the top corner and set Leicester City on their way to an emphatic 4-0 victory over second-tier Stoke City.