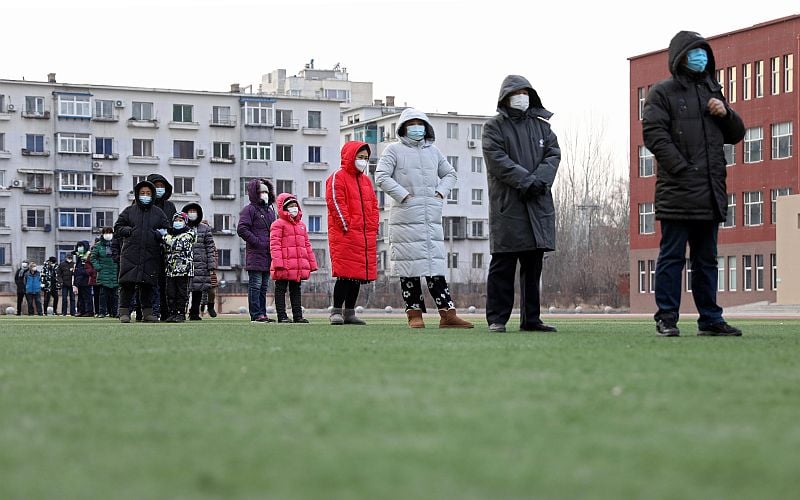 China has recorded the biggest daily jump in COVID cases in more than five months, despite four cities in lockdown, increased testing and other measures aimed at preventing another wave of infections in the world's second biggest economy. However, authorities are implementing strict curbs whenever new cases emerge.

A Chinese province of more than 37 million declared an "emergency state" on Wednesday to snuff out a handful of Covid-19 cases, as the country moved decisively to contain infections.

The National Health Commission announced Wednesday that another 90 confirmed cases had been reported in Hebei province, whose capital Shijiazhuang has accounted for the vast majority of recent cases.

In a village in the south of Beijing that shares a border with Hebei, residents were stopping vehicles and asking to see health-tracking codes on mobile phones.

On Wednesday, the government of northeastern Heilongjiang-with a population of 37.5 million people -declared an "emergency state", telling residents not to leave the province unless absolutely necessary, and to cancel conferences and gatherings.

"We've to be careful as we're near Guan, where COVID cases were reported today".

At a highway checkpoint near Beijing's border with Hebei, police in protective gowns ordered a vehicle entering Beijing to return to Hebei after the driver was unable to show proof of a negative COVID-19 test. Many provinces have asked migrant workers to refrain from traveling during the break.

Langfang, southeast of Beijing, said its 4.9 million residents would be put under home quarantine for seven days and tested for the virus.

The spike in new cases comes as a World Health Organization team of investigators probing the origins of the COVID-19 pandemic are set to arrive in the central Chinese city of Wuhan, where the disease first emerged in late 2019, on Thursday. The city of Suihua, which borders the provincial capital Harbin, put its 5.2 million people under lockdown.

As of January 9, China had administered more than 9 million vaccine doses.

That was in response to finding 28 Covid-19 cases on Wednesday, including 12 which were asymptomatic.

Other provinces in China are reporting new confirmed or asymptomatic cases, as well.

Suihua city, a short auto journey north and home to more than 5.2 million people, was sealed off on Monday after reporting one confirmed case and 45 asymptomatic cases.

The total number of confirmed COVID-19 cases on the mainland reached 87,706 by Tuesday, including 784 patients still receiving treatment, 21 of whom were in severe condition.

A steady trickle of new coronavirus cases has surfaced in China's northern provinces since October, prompting strict restrictions despite the number of infections being small compared to outbreaks in many other countries.