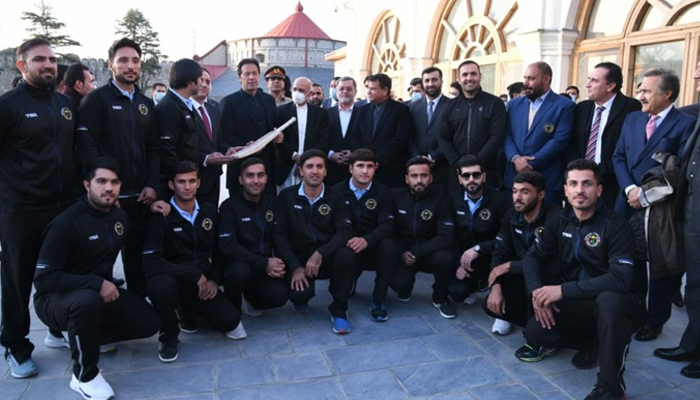 However, many Afghans still view Pakistan with deep mistrust, blaming it for the resurgence of the Taliban and for giving the insurgents a safe haven from which to operate.

"Prior to the press conference, the two leaders held a meeting in which they discussed ways to further deepening the fraternal bilateral relations between Pakistan and Afghanistan, the Afghan peace process, and regional economic development and connectivity", said the state-run Associated Press of Pakistan.

He said Pakistan played a consistent role in intra-Afghan dialogue and noticed with concern the increasing level of violence despite the Qatar peace deal inked between the United States and Taliban in Doha, Qatar this February. "My own conscience will never allow me to do this, I can never accept it", Khan said at the time, adding that if Pakistan made peace with Israel, "we will have to give up Kashmir as well then".

Ashraf Ghani acknowledged that Imran came to Kabul with an "important message to help end violence".

"A comprehensive political settlement for enduring peace within the framework of our values and constitution in the Islamic Republic [of Afghanistan] is the way to the future", he said.

With PM Imran Khan's visit, Ghani said a "foundation of trust was established" to continue the journey towards sustainable peace.

The Afghan President mentioned that during his meeting with Imran, the two sides agreed that respect for Prophet Muhammad (PBUH) was in the hearts and minds of every Muslim and stressed that the world must differentiate between the "negative comments" from "freedom of expression". The Pentagon now says some 2,500 troops will leave by January, just days before President-elect Joe Biden's inauguration, leaving another 2,000 or so US forces in place.

"I am pleased that you have invited me to this historic city of Kabul", the PM said, thanking President Ghani.

Earlier, PM Imran was accorded a warm welcome upon his arrival at the Presidential Palace on his first official visit to the neighbouring country.

The Prime Minister reviewed the guard of honour presented by a contingent of Afghan forces.

Khan also answered questions regarding how he expected his relationship would be with Democrat presidential challenger Joe Biden if he is to be inaugurated president in January.

Oxford, AstraZeneca Coronavirus Vaccine's Strong Response in Elderly Confirmed in Review
Dr Ramasamy added: "The robust antibody and T-cell responses seen in older people in our study are encouraging". The next step will be to see if this translates into protection from the disease itself'. 11/19/2020

Raiders' Ferrell tested positive for COVID-19, likely out vs. Chiefs
The report says that while some players are likely to be cleared by Saturday, others won't be cleared for action until game day. After amassing 4.5 sacks during his rookie campaign, Ferrell has yet to record a quarterback takedown in 2020. 11/19/2020

Lack of common sense in Premier League scheduling, says Chelsea's Frank Lampard
Frank Lampard gave his press conference on Thursday afternoon ahead of playing Newcastle . You want the best of the brand. 11/19/2020

Will Smith And Original Aunt Viv Actress Reconcile In Fresh Prince Reunion
During their sit down, Smith apologized to Hubert for his lack of sensitivity to her during that time. Smith thanked her for sharing with him and the pair welled up, hugging after all that time. 11/19/2020

CHINA Chinese experimental vaccine induces a quick response
And, crucially, the researchers wanted to know if it might work in older people who are most at risk of severe Covid. Older people's weaker immune systems mean vaccines do not tend to function as well as they do in younger people. 11/19/2020

Wind advisories until 5pm — Metro Detroit Forecast
Thursday is the warm day of the week with highs in the lower 60s thanks to sunshine and SW winds to 40 miles per hour . The wind shifts to the NE at 10 miles per hour for Saturday with morning lows in the mid-30s for deer hunters. 11/19/2020

Trump's painstaking vote recount in battleground state likely to FAIL
He said investigators would look into any claims of fraud and that in every election a small number of ballots are cast illegally. That recount would be done using scanners that read and tally the votes and would be paid for by the counties, Sterling said. 11/19/2020

Pfizer ‘Within Days’ of Seeking Emergency Use for COVID-19 Vaccine
Pfizer said vaccine was well-tolerated and that side effects were mostly mild to moderate, and cleared up quickly. Pfizer said it is confident in its existing cold-chain infrastructure to distribute the vaccine globally. 11/19/2020

Glasgow moves into level 4 lockdown on Friday
But for the first time some areas of the country - in western Scotland - have been put into Level 4, close to a complete lockdown. Recent figures show that in the last 24 hours there have been 37 Covid-19 related deaths in Scotland. 11/19/2020

Brazil beat Uruguay to stay top of qualifying group_china
Brazil's persistence paid off in the end of the first half when Richarlison's header from Renan Lodi's cross made it 2-0. After a relatively even opening, Brazil struck twice in the 11 minutes before half-time through Arthur and Richarlison . 11/19/2020