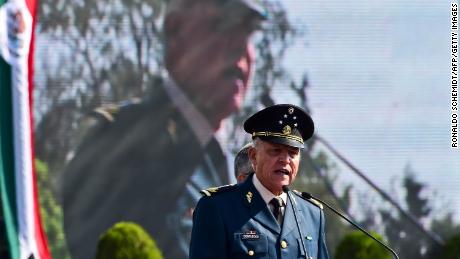 A former Mexican defense secretary arrested in the U.S. last month on charges of being a drug cartel boss is going to be returned to Mexico with a promise by Mexican authorities to investigate him, USA and Mexican top prosecutors announced Tuesday.

At the time of Cienfuegos' arrest, Mexican President Andres Manuel Lopez Obrador said no charges were pending in Mexico against him.

Mexican defense secretary Gen. Salvador Cienfuegos Zepeda, pictured in a court sketch, had been accused of helping the H-2 Cartel, an extremely violent Mexican drug trafficking organization, traffic thousands of kilograms of cocaine, heroin, methamphetamine and marijuana into the U.S.

US court documents describe the extent of Cienfuegos' alleged crimes on behalf of the H-2 Cartel, an extremely violent drug trafficking organization.

Ebrard denied the decision was related to the USA elections or the decision not to congratulate President-elect Joe Biden, noting he spoke with Barr on October 26, a week before the US elections. U.S. District Court Judge Carol B. Amon ordered the U.S. Attorney in Brooklyn to be at that hearing.

A federal judge on Wednesday granted a USA government request to drop drug charges against Cienfuegos and return him to Mexico, a move Mexico said would restore trust in the countries' severely strained security ties. "They are two different processes", Ebrard said. "We do not see this as a path to impunity, but rather as an act of respect for Mexico and the Mexican armed forces".

Ebrard said he spoke with Barr on October 26, a week before the US elections.

Cienfuegos would not necessarily be placed in custody in Mexico.

Mexico's attorney general did not respond to calls for comment.

The source added that the decision to request charges be dropped against Cienfuegos so he could potentially face charges in Mexico was seen as a major step toward improving bilateral relations that had threatened to continue to sour.

Prosecutors wrote in a court filing that "sensitive and important foreign policy considerations outweigh the government's interest in pursuing the prosecution of the defendant. and therefore require dismissal of the case".

The dismissal came one day after a surprise announcement by US Attorney General William Barr and Mexican Attorney General Alejandro Gertz Manero that the US case would end, just one month after being announced.

If he had been tried and found guilty in the United States he would have faced a sentence of 10 years to life in prison.

Mike Vigil, the Drug Enforcement Administration's former chief of global operations, said the decision "is nothing more than a gift, a huge gift" from President Donald Trump to his Mexican counterpart Andres Manuel Lopez Obrador, probably given as a favour for past help on immigration issues.

Cienfuegos, 72, was Mexico's defence minister from 2012 to 2018 under former President Enrique Pena Nieto.

Mexico sent a formal note of protest to the US government about the arrest, a rare instance in which the administration of Lopez Obrador has challenged the Trump administration.

Under Cienfuegos, the Mexican army was accused of frequent human rights abuses, but that was true of both his predecessors and his successor in the post.

The June 2014 massacre involved soldiers who killed 22 suspects at the warehouse in the town of Tlatlaya.

"In recognition of the strong law enforcement partnership between Mexico and the United States, and in the interests of demonstrating our united front against all forms of criminality, the U.S. Department of Justice has made the decision to seek dismissal of the U.S. criminal charges against former Secretary Cienfuegos, so that he may be investigated and, if appropriate, charged, under Mexican law", the joint statement said.

The officials explained the move comes "under the Treaty that governs the sharing of evidence", saying the Justice Department provided Mexico with evidence against Cienfuegos and will cooperate "to support the investigation by Mexican authorities".