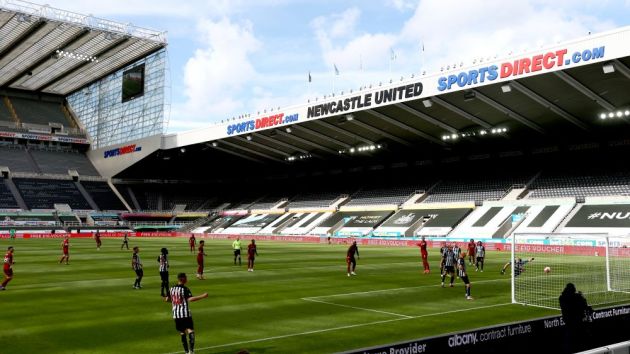 The news comes two months after Sportsmail stated Mike Ashley would take legal action with sources close to the current owner insisting he has a strong case against the League.

Ashley, who has owned Newcastle since 2007, has been trying to sell the club for years.

Newcastle have confirmed they are engaged in an ongoing legal dispute with the Premier League over the failed recent takeover of the club.

The supporters' club says it then received a response from the Premier League's lawyers, Bird and Bird, confirming there was already a legal dispute from the club.

Following that Mike Ashley statement, The Athletic have now reported that their information is that in actual fact, the Saudi PIF 'remain as determined as ever to buy Newcastle, despite having officially withdrawn the bid in July'.

A £300million deal was being negotiated with a Saudi Arabia-backed consortium in June before they pulled out over fears they would not pass a fit and proper persons test.

The Premier League is not commenting on the story, per theBBC. Well one thing for sure, at least today has been a lot more interesting and uplifting than the Steve Bruce style football we are watching this season.

"The club has not previously commented on the arbitration it is entering into against the English Premier League ('EPL') in relation to its conduct in relation to the proposed acquisition due to the confidentiality clause in the EPL Rules".

The club said in a public statement that it was aware of public reports which allegedly state "that the EPL referred to legal proceedings with the club".

"The club understands that these will be matters of great concern to its fans and therefore considers that, in light of the information disclosed by the EPL, it has no choice but to respond and update its fans in response to this coverage", a Newcastle statement said. So, it appears that the EPL has leaked the contents of their letter to some people who have commented in the public domain.

Newcastle Consortium Supporters Ltd told the Shields Gazette: "Bird & Bird [attorneys for the Premier League] has confirmed that the club is now in a legal dispute with the EPL regarding the proposed acquisition, which may lead to a duplication of the issues raised by the fans consortium".

'It is unclear when those proceedings will be resolved, given the approach of the EPL and its lawyers, Bird & Bird.

Guatemala: Congress on fire after protesters storm building
He said he defends people's right to protest "but neither can we allow people to vandalise public or private property". The president said he had been meeting with various groups to present changes to the controversial budget. 11/22/2020

Google, Facebook allow employees to work from home till end of 2020
Now both Facebook and Google have announced that they are not expecting employees to return to the office until at least 2021. 11/22/2020

Torbaaz Trailer: Sanjay Dutt, Haunted By Tragedy, Is A Determined Cricket Coach
Nargis Fakhri appears as an Afghan woman who runs an NGO and helps Sanjay in making the lives of these children better. To note, this will not be the first time when Sanjay Dutt's movie will be looking for a digital release this year. 11/22/2020

Covid vaccine: EU could approve BioNTech, Moderna vaccines in December
Pfizer said its shot being developed with BioNTech was 95% effective in a final analysis of clinical-trial data and it's applying to the U.S. 11/22/2020

De Ligt makes Juventus return in win over Cagliari
Federico Bernardeschi had an early goal ruled offside before Ronaldo struck twice in a four-minute spell before the break. Juventus had chances to extend its advantage in the second half, notably when Demiral headed off the crossbar. 11/22/2020

Almost a Million People Inoculated with Chinese Covid-19 Vaccine, Firm Says
On Wednesday, Pfizer said that its vaccine is 94.5 percent effective even among the elderly and has no side effects. Sinopharm didn't respond to Newsweek's request for comment in time for publication. 11/22/2020

Petrol, diesel prices rise for third straight day
The benchmark brent crude is moving around more than $44 per barrel while the US WTI is quoting at almost $42 per barrel. Before that petrol prices had remained unchanged since September 22, and diesel rates hadn't changed since October 2. 11/22/2020

Ethiopia rebuffs mediation attempts as Tigray offensive continues
Hundreds, possibly thousands, have died and more than 30,000 refugees have fled to Sudan. On Saturday it said Adigrat had also fallen, about 116 km (72 miles) north of Mekelle. 11/22/2020

New Cases Of COVID-19 Confirmed Nationally; Including 6 In Clare
An announcement on exiting the existing Level 5 restrictions is now expected to be made by the Government next Thursday evening. There have now been 70,143 cases of the virus since the pandemic began, with 2,022 COVID-19 related deaths. 11/22/2020

SpaceX Will Have People Living in Glass Domes on Mars, Before Terraforming
Last month, SpaceX also discussed what life might look like when man finally manages to land on the Red Planet. This statement falls in line with wording in Starlink's beta consumer service term. 11/22/2020

Texas postponed due to COVID-19, rescheduled for Dec. 12
Texas-Kansas was just the second Big 12 conference game to be postponed this season and was rescheduled for December 12. Kansas (0-7, 0-6 Big 12) will now be off on consecutive weekends following their open date last Saturday. 11/22/2020