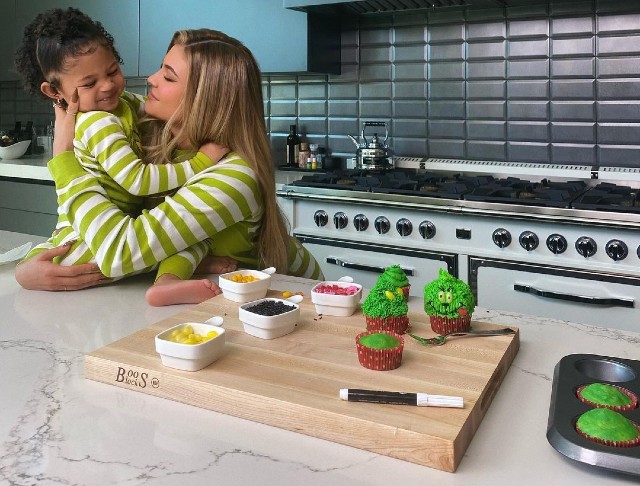 We can always count on Kylie Jenner to prepare an unbelievable makeup collection come the holiday season, and she outdid herself this year.

Prior to these photographs, she shared a video in which she showed her great excitement for launching a Christmas collection this year, which she titled "Crystallized Collection" and for posing in another two-piece outfit; a silver blouse and skirt with sparkles that completely captured her youthful and elegant style.

Though they were dressed low key, Kylie was as elegantly made-up as ever, and she had her long blonde tresses swept to one side. A total natural in front of the camera, the two-year-old declared, "We're making cupcakes!"

'What are we baking today, Storm?' Kylie asked her daughter at the start of her video.

She posed in the outfit for a photo shoot to tease the collection, which intrepid fans figured out thanks to the green color scheme and the fuzzy backdrop.

The doting mother looked outstanding as she unleashed her Kardashian curves in her red-hot swimwear.

In keeping with the minimalist aesthetic the Kardashians have always been associated with, Kylie has decorated the tree with simple string fairy lights, while she has also had the same style of lights installed to hang in rows from the ceiling above. And frankly, paired with wide jeans but also white sneakers, as she did, this look is a nugget!

Kylie Jenner is a true it-girl. I love you so much'.

Kylie replied: 'I love you more'.

So far, Kylie appears to be the only Kardashian who has taken to decorating for Christmas early.

Kylie and her siblings have been actively promoting her new Grinch holiday collection in recent days. The result is a whimsical mood that, fittingly considering Kylie's latest Grinch-inspired make-up line, is certainly Cindy Lou Who-approved.