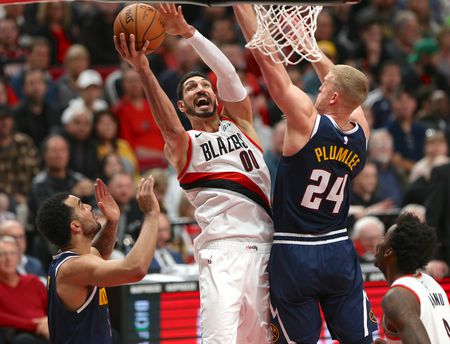 The Portland Trail Blazers have agreed to acquire Enes Kaner from the Boston Celtics in a three-way deal with the Memphis Grizzlies.

The move will knock over $5 million off of Boston's payroll, additional financial flexibility that should come in handy in light of the revelation that Gordon Hayward will not exercise his 2020-21 player option with the team. A 6-foot-8 forward, the Croatian national put up 4.8 points and 3.5 rebounds in 16.4 minutes of action in Portland past year.

Kanter proved to be a key part of the Blazers' run to the Western Conference Finals in 2019.

The Portland Trail Blazers are bringing back a brief blast from their recent past.

Kanter's time in Boston might be best described as up-and-down.

That dichotomy of usefulness against traditional bigs and liability against athletic teams was most evident in this past season's playoffs when Kanter more than held his own against Philadelphia 76ers center Joel Embiid but then barely played against the Toronto Raptors.