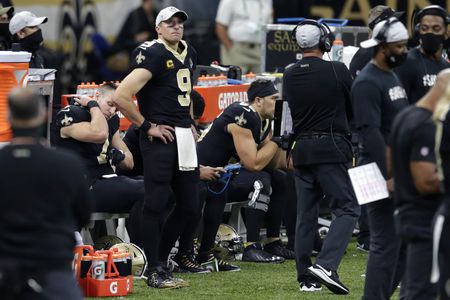 Drew Brees will likely miss several weeks with a rib contusion. Werder reported Brees has been advised to be cautious with the collapsed lung.

Head coach Sean Payton refused to address any injuries on a conference call with reporters on Monday.

ESPN's Ed Werder said Brees suffered two fractured ribs Sunday against the San Francisco 49ers and three others on the right side the previous week against the Tampa Bay Buccaneers that were not seen on X-ray until today.

Winston filled in for Brees after the future Hall of Famer left Sunday's game. and he played OK, completing six of his 10 passes for 63 yards. He has thrown for 79,612 yards and 565 TDs for his career. It was the former No. 1 overall draft pick's second appearance with the Saints since signing a one-year deal in the offseason.

Street's roughing-the-passer penalty was his first of the season, and he could be subject to a $15,000 fine if the National Football League determines the penalty warranted supplemental discipline.