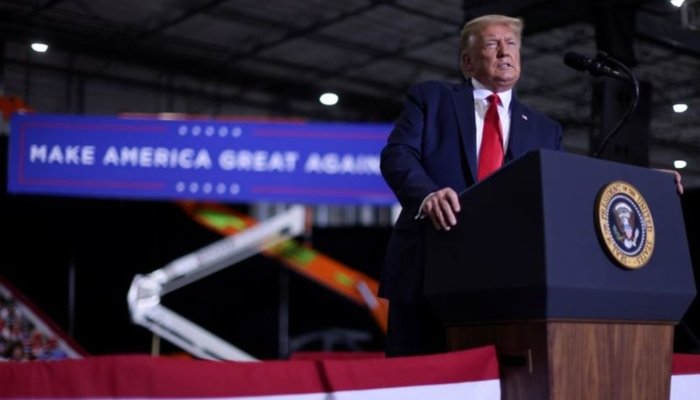 Frustrated by the Palestinians' refusal to take part in Trump's Middle East peace initiative, the White House has sought to bypass them in hopes they will see the deals with the UAE and Bahrain as incentives, even leverage, for peace talks.

The United Arab Emirates and Bahrain on Tuesday will become the latest Arab states to break a long-standing taboo when they sign agreements towards normalising relations with Israel in a strategic realignment of Middle Eastern countries against Iran.

Trump and his allies hope the occasion will burnish Trump's credentials as a peacemaker at the height of his re-election campaign.

Some congressional Democrats who have offered muted praise have been invited to attend.

Trump said Tuesday the UAE and Bahrain agreements are part of a larger diplomatic effort to pressure the Palestinian Authority to the negotiating table.

A senior Trump administration official said that Israel would sign separate agreements with each of the Gulf states and that then the U.S. would join all three in signing a common document known as the Abraham Accords.

The agreements won't end active wars but will rather formalise the normalisation of the Jewish state's already warming relations with the two countries.

Palestinian leaders have condemned both deals. "The Palestinians are very hard to deal with".

Yet even the harshest critics have allowed that the agreements could usher in a major shift in the region should other Arab nations, particularly Saudi Arabia, follow suit, with implications for Iran, Syria and Lebanon. Other Arab countries believed to be close to recognizing Israel include Oman, Sudan and Morocco.

"MORE countries to follow!" wrote the United States leader, who hopes the peace deal will boost his reelection chances in November.

A senior Trump administration official said that the documents were complete or almost finished, that Israel would sign separate agreements with each of the Gulf states and that then the United States would join all three in signing a common document known as the Abraham Accords. Kushner helped negotiate the agreements and is trying to persuade more Gulf countries to strike similar accords with Israel.

The specific contents of the individual documents to be signed Tuesday, however, were not known ahead of the ceremony.

The White House event will be the first time Arab nations have established relations with Israel since Egypt in 1979 and Jordan in 1994. They have been dubbed the "Abraham Accords".

In a nod to the coronavirus that has hit the United States and the world, the White House is encouraging but not requiring the participants to wear masks. Neither country sent its head of state or government to sign the deals with Netanyahu.

Bahrain's largest Shia dominated opposition group, Al-Wefaq, which the government ordered dissolved in 2016 amid a years-long crackdown on dissent, said there is widespread rejection in the country of normalisation. Al-Wefaq said in a statement that it joins other Bahrainis who reject the agreement to normalize ties with the "Zionist entity", and criticized the government for crushing the public's ability to express opinions "to obscure the extent of discontent" at normalization.

"They're very wealthy countries for the most part. some are extraordinarily, like UAE", Trump told "Fox & Friends" in an interview before the ceremony.

He may not want to be seen throwing too much of his support behind Trump weeks ahead of a USA presidential election in which the outcome is far from certain.

Another target is Oman, whose leader spoke with Trump last week.

Breonna Taylor: Louisville to pay millions to mother and reform police
Walker said he called 911 before firing one shot from his licensed firearm, hitting one of the officers in the leg. Sam Aguiar, an attorney for Taylor's family , said the city's handling of the case has been slow and frustrating. 9/15/2020