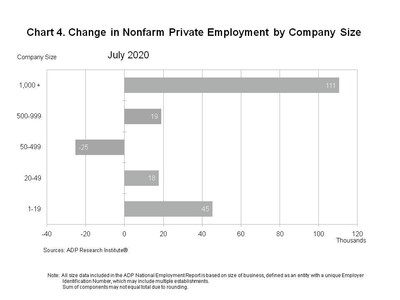 A separate report showed US service industries expanded in July at the fastest pace since February 2019 as the strongest reading yet on orders and a pickup in business activity more than offset a bigger contraction in employment.

Economists had forecast around 1.9 million, with a range between 750,000 and 3.3 million, according to Econoday.

Despite the improvement in the last three months, the labor market is still far from recovering from the record-breaking 19.6 million jobs destruction registered in April as the coronavirus pandemic took hold and economy was brought into halt.

The report, done by the ADP Research Institute along with Moody's Analytics, is based on data through the 12th of the month.

Commenting on the data, "the labor market recovery slowed in the month of July", said Ahu Yildirmaz, vice president and co-head of the ADP Research Institute.

The U.S. Department of Labor is expected to release its July employment report, which covers the same period as the ADP National Employment Report, on Friday. In June, for example, ADP saw private payrolls expanding by 2.369 million a few days before the official report said payrolls expanded by 4.8 million, nearly all of which was private sector employment. Economists expect the government to report that employers added 1.8 million jobs, according to a survey by data provider FactSet.

The goods producing sector added 1,000 jobs overall, due to manufacturing hiring, which grew 10,000 in July.

Jayson Tatum: Scores 34 in big bounceback game
Next, Tatum and his teammates take on the Heat on Tuesday for a game that will have big seeding implications. The victory kept Miami in the hunt for the No. 3 seed in the Eastern Conference. 8/05/2020