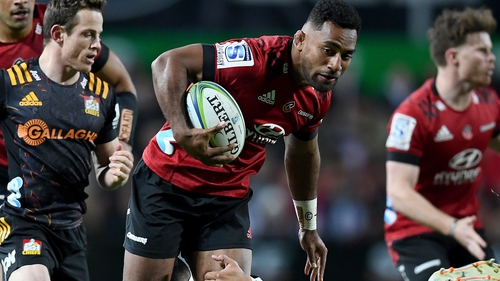 The Crusaders put one hand on the Super Rugby Aotearoa trophy with a 32-19 victory over the Chiefs in Hamilton.

The Chiefs fullback was sent flying in a mighty bump off from Tom Sanders.

Although the Chiefs had dropped their first six games of the season, there was a feeling they could push the Crusaders hard in a nothing to lose clash and do a massive favour to the four other New Zealand teams still in the title reckoning.

Rather than try to go around him though, Sanders simply barged straight over the top of McKenzie to score the Crusaders' first of the evening.

The 10-time Super Rugby champions moved to 24 points on the table, seven ahead of the second-placed Blues, who play the Highlanders in Dunedin on Sunday, then have next week off.

The Crusaders scored five tries in the match through Tom Sanders, Will Jordan, Codie Taylor, Sevu Reece and Leicester Faingaanuku.

The Chiefs, however, battled their way back into the game and struck back with a converted try from impressive loose forward Lachlan Boshier and a Damian McKenzie penalty.

But Crusaders captain Codie Taylor crashed over immediately after Chiefs winger Shaun Stevenson was given a yellow card for a deliberate knock-on, giving the visitors a 17-10 lead at half-time.

The Chiefs are still winless in the competition after seven matches.