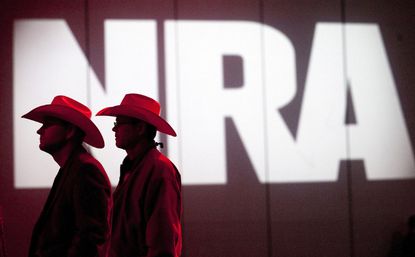 As he was leaving the White House en route to Ohio, Trump responded to a reporter question regarding a lawsuit filed in state court by New York Attorney General Tish James against the NRA, saying that the state's legal efforts against the NRA have "absolutely decimated" the gun advocacy group with its costs.

New York Attorney General Letitia James announced Thursday that her office has filed a lawsuit against the National Rifle Association and its leadership, including Executive Vice President Wayne LaPierre, looking to dissolve the organization.

James charged the gun rights organization with illegal conduct through the diversion of millions of dollars away from the group's charitable mission "for personal use by senior leadership, awarding contracts to the financial gain of close associates and family, and appearing to dole out lucrative no-show contracts to former employees in order to buy their silence and continued loyalty".

"The NRA's influence has been so powerful that the organization went unchecked for decades while top executives funneled millions into their own pockets", said James.

"The NRA is fraught with fraud and abuse", she said in a statement.

"We've come to the conclusion that the NRA unfortunately was serving as a personal piggy bank to four individual defendants", she declared.

James noted, for example, that LaPierre spent "hundreds of thousands of dollars of the NRA's charitable assets for private plane trips for himself and his family, including extended family when he was not present".

Mr Donald Trump paid US$2 million in damages past year after his charitable foundation reached a settlement with the Attorney-General, who accused the president and his children of rampantly violating non-profit rules.

The lawsuit from New York's attorney general also claims Powell, LaPierre's chief of staff, misappropriated NRA funds during the more than three years he worked for the gun group. They're all accused of failing to manage the NRA's funds properly.

James's lawsuit also details a pass-through arrangement between the NRA and Ackerman McQueen, through which the public relations firm covered expenses for LaPierre and other NRA leaders and then billed the gun group for them using descriptions on invoices such as "out-of-pocket expenses".

Phillips is accused of overseeing the pass-through arrangement.

The lawsuit comes at a time when the NRA is trying to remain relevant and a force in the 2020 presidential election as it seeks to help President Donald Trump secure a second term.

There has been an ongoing factional war within organization, pitting some of its most ardent gun-rights supporters and loyalists against one another.

The complaint states Ackerman McQueen received more than $70 million in 2017 and 2018 for "public relations and advertising" services and "out-of-pocket expenditures", which NY prosecutors say were entertainment and travel costs incurred by NRA executives.

Covid 19 coronavirus: Donald Trump's campaign account banned from Twitter
The same clip was also posted on Twitter by the Trump campaign and later shared from the president's main account. A recent study suggested that children under the age of five may carry the virus at higher levels than adults. 8/06/2020