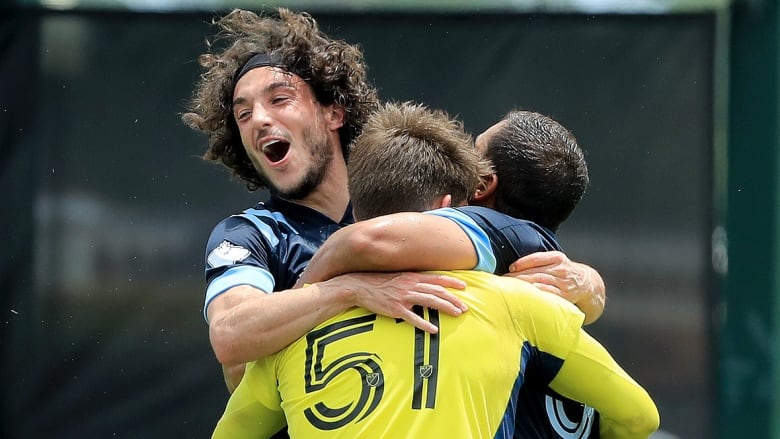 Major League Soccer announced on Saturday its plans to resume the regular season in home markets after spending the past five weeks in an Orlando bubble for the MLS is Back Tournament, which concludes Tuesday with Orlando City vs Portland Timbers in the final.

Each club will play 18 additional regular season games in a phased approach.

The league announced Saturday that each club will play 18 additional games in a phased approach, culminating with Decision Day on November 8, followed by an 18-team playoff to determine the MLS Cup victor on December 12.

Following the second match, the league will embark on the first phase of its schedule, one that will see each team play six games prior to September 14. More details on schedules for the Canadian teams will be announced in the near future.

MLS halted play March 12 after two games because of COVID-19 becoming prevalent in the United States.

The league has announced that 18 clubs will qualify for the playoffs - up from 14 past year - with MLS Cup set to take place on December 12.

Garber said players now understand the importance of following the league's safety protocols, as guidelines will be provided to players and staff to avoid the risk of contracting and spreading COVID-19 during their time away from club facilities.

The league has been playing the monthlong MLS is Back tournament without fans at ESPN's Wide World of Sports complex at Walt Disney World.

"While we wish we could be playing this first batch of home games in front of our incredible fans, we have always said that public health must come first, and we will continue to let our regional health protocols guide this process", said Sounders FC General Manager & President of Soccer Garth Lagerwey. "Hopefully being able to watch our club play with the appropriate safety measures provides enjoyment for our community during these trying times, as we all continue to do our part in the fight against COVID-19". Dallas and Nashville will play three games against each other, having been forced to withdraw from the MLS is Back tournament because of COVID-19 cases. MLS continues to work closely with the league's infectious disease advisors as well as advisors for the MLSPA on the plan for testing.

Now, the league will try to replicate that in home markets, where testing will occur every other day and the day before matches.

Another focus of the new schedule is efficient, safe travel. Teams will be subject to a rigorous testing protocol and will use charter flights to travel.

The continuation of Major League Soccer's 25th Season will air nationally in the US on ESPN, FOX Sports and across Univision's networks, as well as regionally through individual club broadcast partners. All matches not aired by an English-language national network will be streamed live in English on Twitter. Canadian broadcast schedules will be announced at a later date. During the continuation of play, all regional broadcasts will be showcased nationally, out-of-market, on ESPN+.

MLS said that the "majority" of games would be held without fans in attendance, but that the league and its' teams are working with local health authorities and government officials on a plan for limited capacity at certain games where allowed. "We developed our plan in conjunction with our clubs, medical experts, public health officials and the MLS Players Association that allows us to put the health and safety of our players, coaches and staff first".

2020 regular season is set for re-start on Wednesday, August 12. The playoffs will be expanded from 14 to 18 teams.

City, county leaders expected to denounce Kanye West presidential campaign
Ballot access deadlines have passed in 21 states and Washington, D.C., which account for 246 electoral votes. West did not enter the presidential race until July 4, when he made the shocking announcement on Twitter . 8/10/2020

Gov. DeWine tests negative again for COVID-19
As of Thursday, the Ohio Department of Health reports 97,471 confirmed and probable cases of COVID-19 in the state. Jon Husted also took a COVID-19 test and tested negative. "You always have to worry about fraud", DeWine said. 8/10/2020

French nationals killed in Niger, Macron's office says
In January, Nigerien authorities banned the use of motorcycles in an attempt to curb the movements of jihadis. However the Tillaberi region is in a hugely unstable location, near the borders of Mali and Burkina Faso. 8/10/2020

Kelly Osbourne looks unrecognisable in selfie following 6st weight loss
The 35-year-old revealed that she has lost 85 pounds in a comment she directed to Olivia TuTram Mai - the mother of media personality Jeannie Mai. 8/10/2020

Mosquitoes carrying West Nile virus located in Markham
Experts are tracking West Nile virus, Eastern Equine Encephalitis, Zika and the emerging Jamestown Canyon virus. They also urge anyone who is outdoors to wear protective clothing and to use insect repellent. 8/10/2020

Cardi B & Megan Thee Stallion's "WAP" Video Is Wild
And that's understandable, all that extra attention does is bring more clicks, exposure, and a chance to break even more records. Her sister Kim Kardashian praised Kylie for appearing in the video on Instagram, writing "OMG @kyliejenner". 8/10/2020

Solskjaer claims UEL win would be his biggest Manchester United moment
Manchester United trained in Cologne on Sunday as they prepared to take on Copenhagen in the Europa League quarter-finals. They have to be there. "But you also play for the team and the three of them have been backing each other up". 8/10/2020

Atletico Madrid confirm two positive COVID-19 cases ahead of CL clash
Earlier this week Atletico had to cancel a friendly for their women's team after a positive test within the group. Real have since been knocked out of the Champions League but Sevilla are still involved in the Europa League. 8/10/2020

Fall in emissions from lockdowns will not help climate
The team also modelled options for post-lockdown action, ranging from a fossil-fuelled recovery to two different levels of green stimulus. 8/10/2020

See the engagement ring Conor McGregor got for longtime girlfriend Dee Devlin
As of right here now today, Conor is retired until Conor tells me differently, I'm not trying to make any fights for Conor. McGregor and Devlin have 2 children together - 3-year-old Conor Jr. and nearly 2-year-old Croia. 8/10/2020