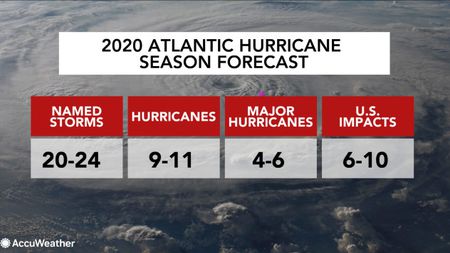 These numbers include the nine named storms and two hurricanes (Hanna, Isaias) that have already developed this summer.

The National Oceanic and Atmospheric Administration updated its outlook for the 2020 Atlantic Hurricane Season on Thursday and now says we could be in for an "extremely active" season.

That's an increase from earlier this season, when forecasters predicted a 60 percent chance of an above-average season. To put that in perspective, 24 named storms would be the second most on record since 1850, only surpassed by the 28 named systems that formed in 2005. First, we have already had nine named storms. If the 24 named storms verify for the 2020 hurricane season, we could see a Tropical Storm or Hurricane Gamma.

The number of storms don't matter as much as where they go, MIT meteorology professor Kerry Emanuel said, noting the busy 2010 hurricane season that barely touched the United States.

It is important to remember that just because an updated forecast calls for a significant number of storms, that does not mean all of those storms will make landfall. It says there's a 74% chance that yet another storm will hit the USA coastline somewhere, with a 49% chance of a hit on the East Coast and Florida peninsula and a 48% chance of a hit on the Gulf Coast.

Most of this year's storms so far have been weak, decapitated by high level winds and dry air, but Klotzbach said that's about to change.

Audi Apologizes for 'Insensitive' Ad
Audi said it will "immediately examine internally, how this campaign has been created and if control mechanisms failed in this case ." . 8/06/2020