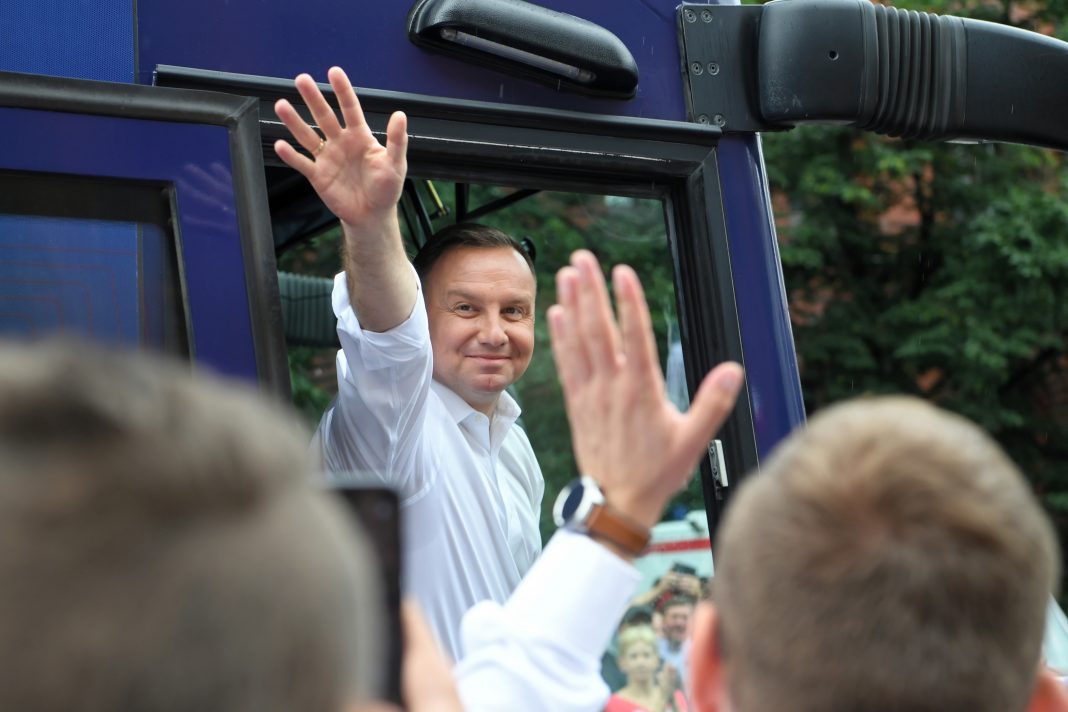 Polish President Andjei Duda and his rival from the largest opposition party - the centrist Civic Platform (PO), the current mayor of Warsaw, Rafal Trzaskowski, have both won the first round of the presidential election, Ipsos showed on Sunday.

Ten candidates are vying to replace him, but opinion polls show that Warsaw Mayor Rafal Trzaskowski, a liberal from the main Civic Platform (PO) opposition party, will enter a neck-and-neck run-off on July 12.

President Andrzej Duda, a 48-year-old conservative backed by the nationalist ruling Law and Justice party, was running against 10 other candidates as he sought a second 5-year term.

Trzaskowski, who has promised to heal rifts with the European Union, is set to come second with 30.4 percent, but could receive endorsements from other opposition candidates ahead of the July 12 second round of voting. "A lot will really depend on this decision", said Poland's anti-communist hero Lech Walesa as he voted in the northern port of Gdansk.

The campaign has been dominated by concerns over democracy and bread and butter economic issues as Poland faces its first recession since the end of communism because of the pandemic fallout.

Poland's state electoral commission has said it would release the final official results by Wednesday evening.

The Law and Justice party has been in conflict with the EU over laws that have given it control over top courts and key judicial bodies, something the 27-nation bloc has denounced as an erosion of democratic European values.

Some analysts view the election as a crucial juncture: a second five-year term for Duda would allow the PiS to make even more controversial changes while defeat could unravel the party's power.

Inside the polling stations, officials wore masks and transparent visors and many voters carried their own pens fearing contagion.

Poland's state electoral commission announced the results of the election on Monday based on a count of almost 99.8% of votes.

Opponents of PiS say that if Trzaskowski wins, he will be able to frustrate the legislative agenda of PiS through the presidential veto, as well as provide a different face of Poland to Brussels and the outside world.

"Personally I only see Duda as president", said Guzik, 52, an employee at the PGNIG state gas company.

Duda, who made attacks on "LGBT ideology" a major part of his campaign, will carry a strong advantage from the first round into the run-off, and said on Sunday night he had received a higher percentage than he had done in the first round five years ago.

Most of his supporters have said in surveys they would back Mr Trzaskowski in a run-off.

Campaigning with the slogan "Enough is Enough", Trzaskowski promises to use the experience and contacts he gathered as a former European affairs minister to "fight hard" for a fair slice of the EU's 2021-27 budget, and to fix tattered ties with Brussels.

Another COVID-19 case has been reported in Winneshiek County
Though testing has ramped up, experts do not attribute the increase in identified positive cases to testing alone. NHRMC has seen 151 total patients hospitalized for Covid-19 to date, with 98 discharged. 7/01/2020

English domestic cricket set to return on August 1
With players mostly being in lockdown from the last three months, they are expected to resume training on or after July 1. County cricket was originally scheduled to start in April but was delayed due to the coronavirus pandemic . 7/01/2020

YouTube TV Raises Prices From $50/Month to $65/Month
As we continue to evaluate how to provide the best possible service and content for you, our membership price will be $64.99. YouTube TV now provides more than 85 channels, including local TV stations in almost all USA markets. 7/01/2020

Carl Reiner, beloved comedy legend, is dead at 98
Reiner wrote four volumes of memoirs, including "I Just Remembered" in 2014, as well as children's books. He would go on to appear in shows titled Inside U.S.A. and Alive and Kicking on Broadway. 7/01/2020

Hinshaw to deliver Alberta COVID-19 update Tuesday afternoon
Alberta Health Services is working with restaurant operators to facilitate testing, Hinshaw said. There were 547 active cases in the province and 7,407 Albertans were listed as recovered. 7/01/2020

HIV drug not effective for hospitalised Covid patients not on ventilator
The results do not include patients on ventilators because of how hard it is to administer drugs to them. Over 11,800 patients have been enrolled from 176 NHS hospitals in the United Kingdom for the trial. 7/01/2020

Juventus' Miralem Pjanić to join Barcelona in a swap deal
The Italian giants and their LaLiga counterparts announced a massive swap involving Arthur and Miralem Pjanic on Monday. In a statement, Juventus said they had signed Arthur for "72 million euros payable in four years". 7/01/2020

Is Texas COVID-19 Spike A Result Of US Mask Apathy?
According to NBC News , Pence wore a mask earlier in the day but did not wear one when speaking at the news conference. The state reported five new virus deaths on Saturday, its lowest reported daily death toll since March 15. 7/01/2020

John Wayne's Son Says Legend Was Not a White Supremacist
I don't believe in giving responsibilities and positions of leadership and judgment to irresponsible individuals. He concluded his statement: "My father believed that we can learn from yesterday, but not by erasing the past. 7/01/2020