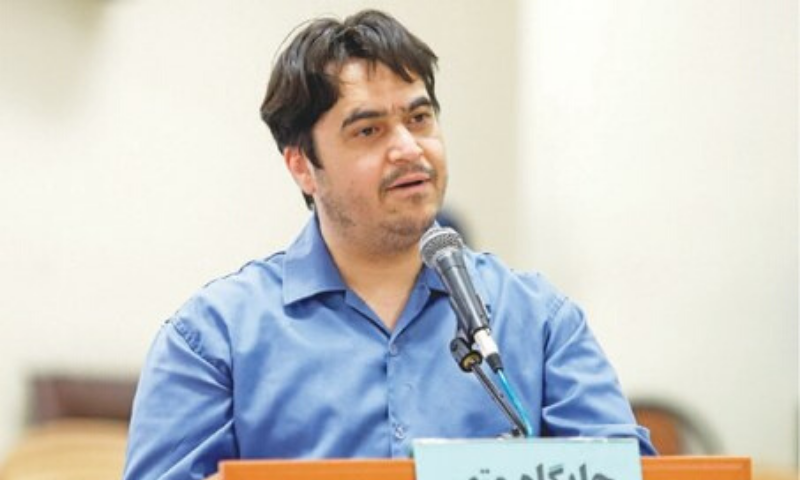 At the time, the IRGC said that "the French intelligence service was behind Zam's activities, which were also backed by the US and Zionist regime's spy services" and that Zam "was supported by those intelligence services to foment a psychological war on Iran in order to create divisions inside the country, especially targeting the younger generations".

Zam had been living in exile in France, but was arrested a year ago.

Last October, Iran's Revolutionary Guards said they had "trapped" Zam, who had been given political asylum in France and was also based in other parts of Europe, in a "complex operation using intelligence deception".

Zam later appeared in televised confessions, where he offered an apology for his past activities.

The news network, which has around 1.4m followers on encrypted messaging app Telegram, shared videos of protests and damaging information about Iranian officials. It was not immediately clear when the sentence was handed down. The charge, used in cases of armed uprising and espionage, is a capital offence under Iran's Islamic law.

He ran the Amadnews website, a popular anti-government forum which Iran accuses of inciting the nationwide protests of 2017-18.

According to Zam, his channel shared logistical information about the late 2017 anti-government protests and circulated videos from the demonstrations.

Officials said 21 people were killed during the unrest and thousands were arrested.

Zam is the son of Shiite cleric Mohammad Ali Zam, a reformist who served in a government policy position in the early 1980s. The scholar wrote a letter published by Iranian media in July 2017, in which he said he would not support his son over AmadNews' reporting and messages.

Meanwhile, Mr Esmaili said an appeals court upheld a prison sentence for Fariba Adelkhah a prominent researcher with dual French-Iranian citizenship. He said her time spent in jail will count toward the sentence.

Iranian officials disclosed last July that Adelkhah had been arrested on espionage charges.

The claims against Zam or the protesters can not be verified as security related trials in Iran are held behind closed doors without due process of law.

Ms Adelkhah and her French fellow researcher, Roland Marchal, were held in Iran's Evin Prison. Authorities released Marchal in March in an apparent prisoner swap for Iranian Jalal Ruhollahnejad, who had been held in France.