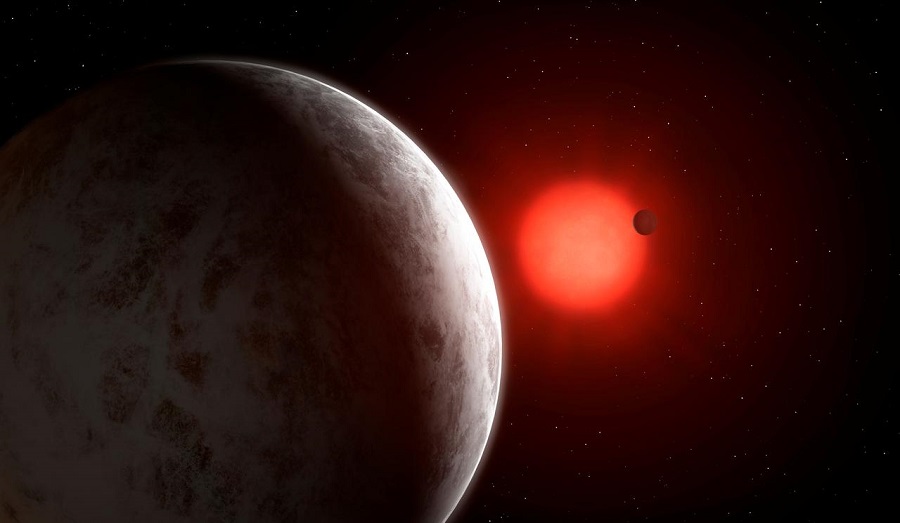 A small star only 11 light-years from our solar system may play host to a clutch of planets, one of which might be suitable for life.

The worldwide "RedDots" team - joined by Australian astronomers at UNSW Sydney, Macquarie University and University of Southern Queensland for this work - has detected a system of super-Earth planets orbiting the brightest red dwarf star in the sky, Gliese 887. For those who do not know, super Earth is planets that have a higher mass than Earth but are much less than Neptune and Uranus.

But stars like these are cooler than the Sun, which means the habitable zone - the orbital band where temperatures are mild enough to allow liquid surface water - is much closer to GJ 887 in comparison with the Earth's distance from the Sun.

"We used a technique known as Doppler wobble, which enables us to measure the tiny back and forth wobbles of the star caused by the gravitational pull of the planets", they explained. Now, researchers say they've spotted a nearby star that appears to host not one, not two, but up to three so-called "super Earths".

Two planets have been definitively identified, one orbiting Gliese 887 every nine days and the other every 21 days.

Both planets are interior to, but close to the inner edge of, the liquid-water habitable zone.

"These planets will provide the best prospects for more detailed studies, including the search for life outside our solar system", said Jeffers.

The researchers also detected an unconfirmed signal, raising hopes of a third planet with a more "temperate" orbit, but they are "cautious" about the finding. "If someone had to live around a red dwarf, they would want to choose a quieter star like GJ 887", writes Melvyn Davies in a related Perspective.

The astronomers also found that the red dwarf is less active than our Sun. Scientists note that these new planets can have a thicker atmosphere than Earth, and may even host life. "By a quiet star, I mean that it doesn't have the dark starspots or the energetic outbursts [flares] that we see on the Sun".

An artist's impression of the multiplanetary system of super-Earths orbiting the nearby red dwarf star Lacaille 9352.

Another thing that the researchers found is that Gliese 887's brightness is quite constant, which would make future studies of the super-Earths' atmospheres much easier. The research team led by the University of Göttingen was able to detect a pair of large rocky bodies orbiting this small star, and they say there might be a third.

This planetary system will be a key target for study using NASA's next-generation James Webb Space Telescope, due for a 2021 launch, Jeffers said. Still, "we've been looking for exoplanets orbiting Gliese 887 for almost 20 years, and while we saw hints of a planetary signal, it wasn't strong enough to convince ourselves that it was a planet", study lead author Sandra Jeffers, an astrophysicist at the University of Göttingen in Germany, told Space.com.

Wirecard goes bust amid German accounting scandal
Wirecard AG, the crypto card issuer and global payments provider based in Munich, filed for insolvency on June 25, 2020. With Wirecard having failed to file audited financials, the banks could call in the loans at any time. 6/27/2020

Two new COVID-19 cases confirmed in West Lethbridge
A majority of people who now have COVID-19 in the province are under 40 years of age, Alberta chief medical officer of health Dr. Officials at the Misericorida Community Hospital in Edmonton are still responding to COVID-19 outbreaks on two units. 6/27/2020

Trump wants federal hiring to focus on title skills
The majority of statues and monuments that have been targeted have not been federal government property. The National Park Service has since placed a barrier around the statue. 6/27/2020

House Democrats Pass Bill to Make DC the 51st State
She graduated from Columbia University School of Journalism and was previously a News and Politics Writer for Bustle News. The bill is unlikely to become law unless Democrats gain a majority in the Senate in the upcoming November election. 6/27/2020

'Crisis like no other' to hit RI economy, warns International Monetary Fund
For economies struggling to control infection rates, a lengthier lockdown will inflict an additional toll on activity. Global trade volume in goods and services will probably tumble 11.9 per cent this year, the fund said. 6/27/2020

Blackpink makes comeback with 'How You Like That'
The band are set to perform the song for the first time on Jimmy Fallon's U.S. chat show on Friday, 26 June. The MV is about colourful and elaborate sets features a stunning ensemble dance sequence in the end. 6/27/2020

Late Aspas free-kick deals Barcelona huge title blow
But Suarez restored Barca's lead in the 67th minute after combining again with Messi, swivelling to fire into the bottom corner. The hosts should have won the game deep into injury time but Nolito's close-range shot was straight at Marc-Andre ter Stegen . 6/27/2020

New Coronavirus cases increase in MI for 5th consecutive day
Michigan's rate of positive COVID-19 tests has stayed below 3 percent since June 5, and below 10 percent since April 29. Beginning on June 15, hair salons, barber shops, nail salons, and tattoo parlors were allowed to reopen. 6/27/2020

Bruno Fernandes reveals how Paul Pogba helped him settle at Man United
The FA Cup represents one of their two remaining opportunities for silverware this season, with the Europa League the other. United have improved significantly since the signing of Bruno Fernandes in January and are now on a 13-match unbeaten run. 6/27/2020

Faith Hill Calls for MS to Change Its State Flag
Of the controversial symbol, Mississippi State University President Mark Keenum said, "We know this symbol is holding us back in the eyes of citizens all across this nation". 6/27/2020

The 2021 F-150 elevates Ford's bed game
The energy generators are readily available in 2.4-kW and 7.2-kW versions for non-hybrid styles with fuel engines. The front has been updated, thanks to its updated headlamp design, new power dome hood and wrap-around bumpers. 6/27/2020

Gal Gadot & Kristen Wiig: Wonder Woman 1984 Doesn't Feel Like A Sequel
I don't know exactly how a pandemic story would fit in, but I have faith that Jenkins will have something for everyone to see. Putting all the speculations to rest, the filmmaker announced that the upcoming film is a sequel and not a boot. 6/27/2020