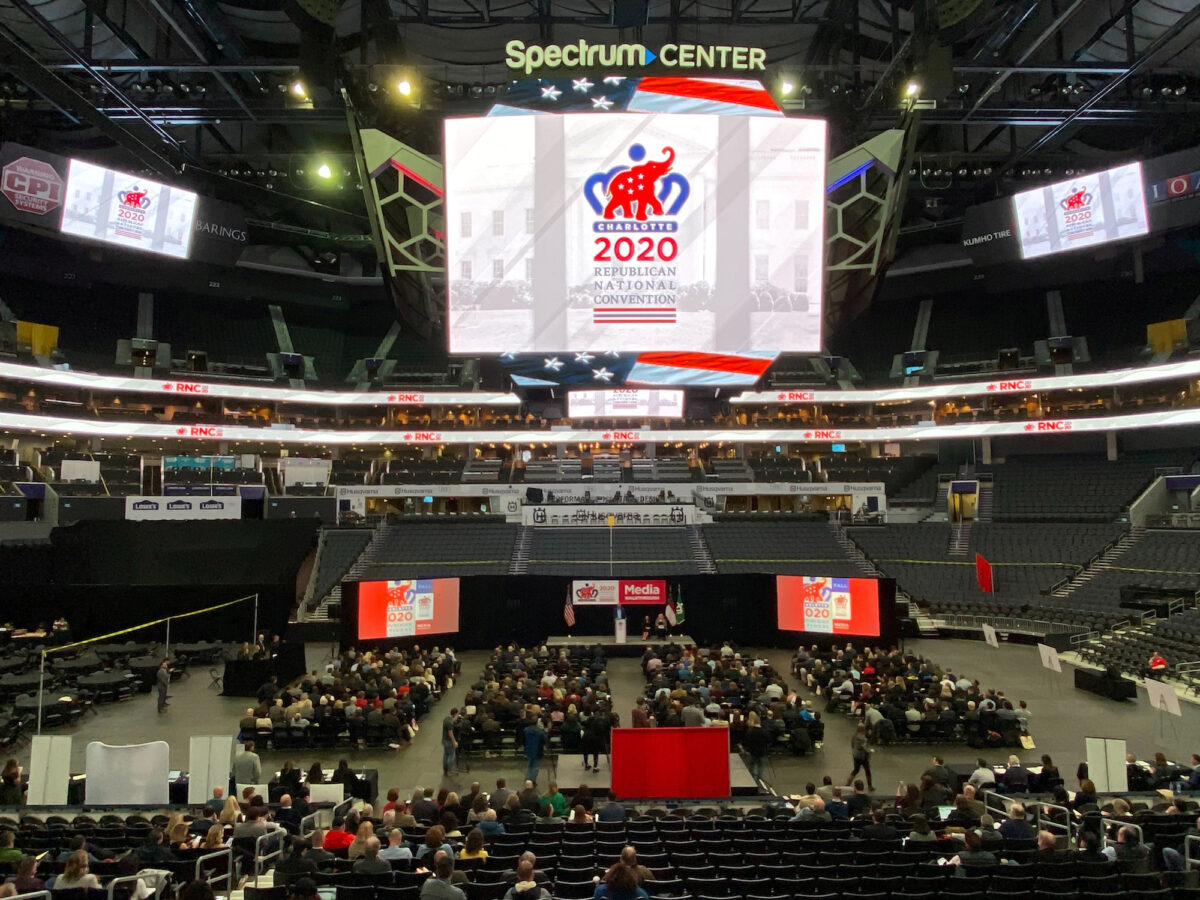 'We think it is unlikely that we would be to the point at the end of August to be able to have a jam packed 19,000-person convention in the Spectrum arena, ' Cooper said.

A Charlotte convention could help Trump boost enthusiasm among North Carolina supporters, but he could also frustrate some voters if he pushes too hard during a delicate time for health and public safety, Bitzer said.

Republican National Committee (RNC) chairwoman Ronna McDaniel said in a June 2 statement that the GOP would start visiting the cities and states that have offered to host the party's four-day nominating convention, scheduled to open on August 24, at which Republicans are expected to officially nominate President Donald Trump for a second term.

Republican officials so far have submitted proposals for a "full convention" rather than one with fewer participants and social distancing as requested by the state, Cooper said.

PREVIOUS North Carolina's Democratic governor, Roy Cooper, on Tuesday rejected the GOP's plans for a full-fledged convention in Charlotte, telling Republican officials the only way the event would move forward is with proper health protocols in place.

Cooper said he could make no such promise for the four-day nominating convention scheduled to open on August 24.

Without knowing how the COVID-19 outbreak will continue to unfold, he said, "planning for a scaled-down convention with fewer people, social distancing and face coverings is a necessity".

According to Lee, GOP officials will tour Nashville on Thursday. Party officials have already begun weighing other location options, including Florida, Georgia and Tennessee, which all have Republican governors.

"Every day it is becoming clearer that Roy Cooper is putting politics ahead of results", said North Carolina GOP spokesman Tim Wigginton in a statement.

In a letter to Cooper last week, McDaniel asked him to approve a series of safety protocols and logistical measures that Republicans agreed to, including health questionnaires and thermal scans for fever. Mecklenburg County accounted for 4,500 cases - more than double the next-highest county - and almost 100 deaths.

'Look, we're not going to move forward with any activities that do not follow federal, state or local requirements and regulations. So, we need to know what those requirements are going to be, ' he said.

This is a developing story. Check back soon for updates.

Two kids dead after taking grandmother's auto , crashing into creek in Missouri
Two young brothers, ages 6 and 7, were killed Friday night in a auto crash in which the 7-year-old was driving. The auto then struck a guardrail, struck the ground again becoming airborne for the second time. 6/03/2020

Ontario extends state of emergency till June 30th
The Ontario government has once again extended a state of emergency as the COVID-19 crisis continues across the province. Ontario reported 446 new coronavirus cases on Tuesday and 17 more deaths, with 15,244 additional tests conducted. 6/03/2020

Top US lawmaker slams ‘bully’ Beijing amid tensions along India-Chinese border
The latest set of intrusions took place on 5 and 9 May, respectively, in east Ladakh's Pangong Tso and Sikkim's Naka Lu areas. But India had formally denied any incursion, attributing it to "differing perceptions of the Line of Actual Control ". 6/03/2020

National Basketball Association targets late July date for season return
They ranked 13th in the Eastern Conference ahead of the Atlanta Hawks and the Cleveland Cavaliers. It is unclear where the games would be played or whether spectators would be allowed to attend. 6/03/2020

Apology for family of Qld 'virus' man
The results sparked a full-scale health response, with fever clinics set up and locals urged to get tested immediately. She said the results were compromised by one sample contaminated with excessive blood from the post mortem process. 6/03/2020

Grant Napier Out At KHTK And As Kings TV Voice
Webber added two clown emojis. "Would expect nothing less from a closet racists [sic]", Barnes said. After reviewing the matter carefully, we have made the hard decision to part ways with Grant". 6/03/2020

Risk of dying from Covid-19 higher for ethnic minorities
He added that the disparity "holds even after accounting for the effect of age, deprivation, region and sex". Those aged 80 or over are 70 times more likely to die than those under 40. 6/03/2020

Australian ambassador raises attack on Channel 7 news crew with US government
According to 7News , Myers was struck in the chest by a riot shield and Brace was clubbed with a police baton. In the video , Brace and Myers are recording the protests from behind a cement structure. 6/03/2020

Australia eases social distancing restrictions as economic recovery efforts intensify
In South Australia , venues can have up to 80 patrons, provided they are contained to groups of 20 in separate rooms or areas. NSW pubs, magnificence salons and museums reopen, and vacation journey inside state boundaries will even be permitted. 6/03/2020

Scott Disick 'always flirts' with 'best friend' Kourtney Kardashian
The 21-year-old Select Model's famous father Lionel Richie never approved of the May-December relationship. As per reports in Us Weekly , a source informed the portal that it has been an "ongoing thing". 6/03/2020

Eclipse to accompany full strawberry moon
While people gear up for the upcoming lunar eclipse on June 5, they can also look forward to two more that will happen this year. To witness the Strawberry Moon Eclipse, it is important to understand what is a penumbral lunar eclipse . 6/03/2020