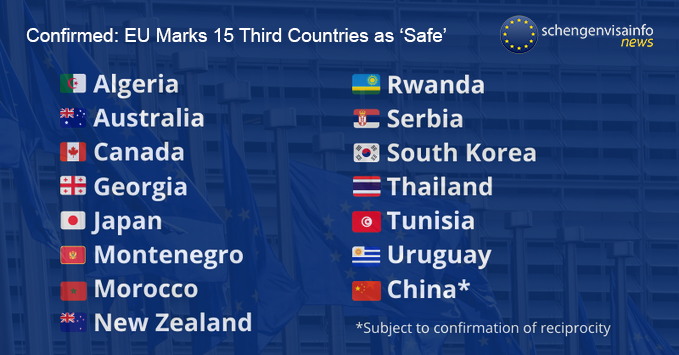 Earlier this month the European Commission also stressed that reopening borders with non-EU states in the Western Balkans was a priority from 1 July.

The criteria requires that confirmed Covid cases in countries on the list are similar or below that of the EU's per 100,000 citizens over the previous 14 days (starting from June 15).

While the initial draft included 54 countries, the updated version has just 14, including Canada.

The list has already aroused controversy after sources revealed that the United States - the worst-affected country worldwide by COVID-19 with more than 2.4 million cases, is on the latter list.

There has been a disagreement between European Union countries on the criteria to use for this decision, with some maintaining that data about COVID rates are not reliable.

It is said the countries however managed to create a list of the countries with a better epidemiological situation, the citizens of which will be able to enter Europe by the end of next week.

The US and Brazil are both struggling with increasing numbers of coronavirus infections, while Chinese citizens will be allowed entry once a reciprocal agreement is made for European Union citizens into China.

Still, many people both inside and outside Europe remain wary of travel in the coronavirus era, given the unpredictability of the pandemic and the possibility of second waves of infection that could affect flights and hotel bookings.

It includes citizens from Japan, South Korea, New Zealand, Australia and Canada who will be given the green light. Officials have stated that this list "will be reviewed every two weeks to reflect the changing realities of the coronavirus outbreaks in individual nations".

When EU guidelines were released a few weeks ago officials said the list would take into account the infection rate in countries concerned. As the Council says, the recommendation "is not a legally binding instrument". However, those same officials await the response from US President Donald Trump, who has previously attacked the European Union on other issues such as trade and foreign policy.