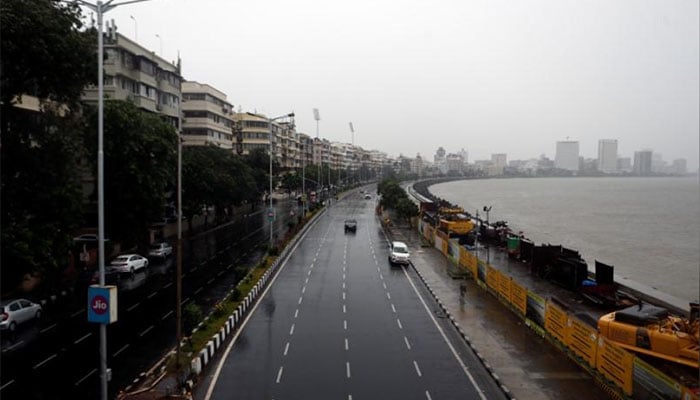 Cyclones often skirt Mumbai, a metropolis of more than 20 million people, though every year during the June-September monsoon season torrential rains flood roads and halt a suburban railway service that serves millions.

The local government said people living in flimsy homes near the shore were being moved. With powerful storms a rarity, there were no pre-existing cyclone shelters, and numerous city's large and sturdy buildings have already been converted into coronavirus isolation or treatment facilities, National Disaster Response Force spokesperson Krishan Kumar said.

With more than 40,000 confirmed virus cases, and nearly 1,400 deaths, Mumbai is the worst-affected city in India.

Nisarga was forecast to drop heavy rain and bring sustained winds of 68mph when it makes landfall as a severe cyclone about 60 miles south of Mumbai, India's Meteorological Department said.

Extra care is being taken to prevent disruption to the power supply as thousands of patients undergo treatment in hospitals throughout the region, the National Disaster Response Force (NDRF) officials said.

More than 100,000 other people were evacuated from the western states of Maharashtra and Gujarat.

Ahead of the storm, about 100,000 people were evacuated from low-lying areas in Maharashtra and neighbouring Gujarat. It will gradually enter into Mumbai and Thane districts during the next three hours, the IMD said in a statement.

"In wake of the coronavirus outbreak, all standard operating procedures are being followed at the temporary shelters which have been sanitised and instructions have been issued on following safe distancing", Arpit Sagar, an official in Valsad, told the AFP news agency.

More than 85 people were killed by Amphan in both eastern India and Bangladesh.

Adam Sobel, an atmospheric scientist and professor at Columbia University, wrote that Nisarga could be "the strongest storm to affect the city directly in at least 70 years".

Coronavirus contact tracers 'paid to watch Netflix'
We were always told that one of the keys to lifting the lockdown was having an effective test and trace operation in place. If they test positive, they must continue to stay at home for seven days or until their symptoms have passed. 6/03/2020

Campaigners slam 'whitewash' as Saudi Arabia co-hosts Yemen humanitarian conference
Aid agencies in Yemen are calling on donors to pledge generously to the humanitarian operation on 2 June and pay pledges promptly. The US and United Kingdom , both leading arms suppliers to Saudi Arabia, offered aid worth $225m and £160m respectively. 6/03/2020