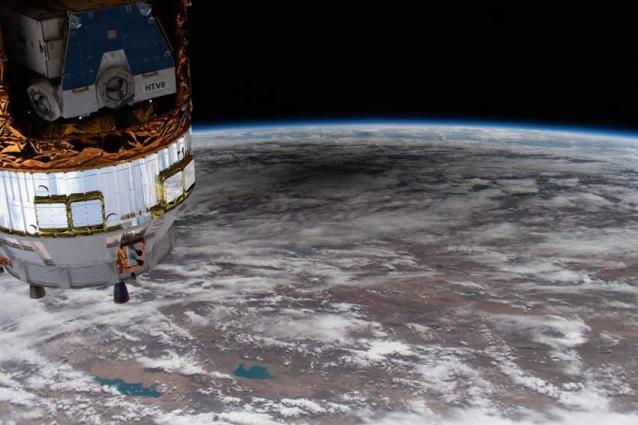 A spacewalking astronaut added to the millions of pieces of junk orbiting the Earth on Friday when he lost a small mirror as soon as he stepped out of the International Space Station for battery work.

The new lithium-ion batteries the men are replacing the old batteries with arrived at the International Space Station last month on a Japanese cargo ship.

According to the outlet, Cassidy, while coming out of the airlock to begin works on the ISS outer surface, reported that the small mirror had somehow come off the sleeve of his spacesuit and floated into space at a speed of about a mile per hour. The lost item posed no risk to either the spacewalk or the station, NASA said.

Such mirrors are attached to the wrist to help the astronauts to see the electrical components on a spacesuit and any blind spots that may occur.

The spacewalkers removed five of six aging nickel-hydrogen batteries for one of two power channels for the starboard 6 truss, installed two of three new lithium-ion batteries, and installed two of three associated adapter plates that are used to complete the power circuit to the new batteries, said NASA. It's cumbersome work: Each battery is about a yard (meter) tall and wide, with a mass of 400 pounds (180 kilograms). They are going to go outside the station on Wednesday, 1 July.

Friday's mission is the seventh spacewalk for both Cassidy and Behnken, who were selected by NASA in 2004 and 2000, respectively.

As the spacewalk ended, Cassidy thanked the cleaning staff at Mission Control in Houston, kept especially busy during "this insane, interesting time".

Behnken and Doug Hurley made history at the end of May with SpaceX's first astronaut launch. Each has spent more than 30 hours out in the vacuum of space. The AP is exclusively responsible for all content.

Russian film director who mocked state, church gets suspended sentence
The case has been criticized in Russian Federation and overseas as an attempt to limit artistic freedom. The defence has argued the project actually required more investment than the provided state funds. 6/28/2020

Vunivalu helps the Storm destroy the Warriors 50
Vunivalu scored a hat trick, Ryan Papenhuyzen and Paul Momirovski nabbed two each, while Jahrome Hughes tallied four try assists. The Storm ran in nine tries - three of which were scored by Suliasi Vunivalu - in a 50-6 thrashing of the Warriors. 6/28/2020

New Trailer Debuts for Disney and Pixar's "Soul"
After having its original June release date delayed by the coronavirus pandemic, " Soul " will be released on november 20 . Pixar debuted a new, musical look at the movie as part of a longer Essence Festival panel called "Finding Soul ". 6/28/2020

Meet Molly Sanden, the Singing Voice for Rachel McAdams in 'Eurovision' Movie!
Demi Lovato has a small part in the new Netflix movie Eurovision Song Contest: The Story of Fire Saga and she also sings a brand new song in the film. 6/28/2020

The chief of police of Tucson, resigned after the death arrested
Ingram-Lopez began screaming for help while being arrested, asking his grandmother for help and water while police restrained him. He said that although he was briefed the day after Ingram-Lopez's death, nobody in his administration viewed the video then. 6/28/2020

Tesco sales soar amid lockdown
In total, our latest estimate of incremental costs for the United Kingdom for the full year is approximately £840 million. 6/28/2020

Coronavirus Reportedly Detected in Wastewater Samples From March 2019
The test, taken on 12 March past year , suddenly for scientists was positive, indicating the presence of SARS-CoV-2. This led to the discovery of the traces of virus from the sample collected on March 12, 2019. 6/28/2020

Princeton University drops Woodrow Wilson's name from school
But while Princeton honored Wilson despite or perhaps even in ignorance of his views, that is part of the problem, Eisgruber said. Again, I've troubled by the slippery slope. 6/28/2020

The Kanye West Gap Memes are Here and They're Hilarious
Yeezy would have to buy half of those shares at roughly Thursday's closing price of $10.16 and the other half at $25 each. The Yeezy Gap line's anticipated 2021 launch will include men, women, and kids pieces. 6/28/2020