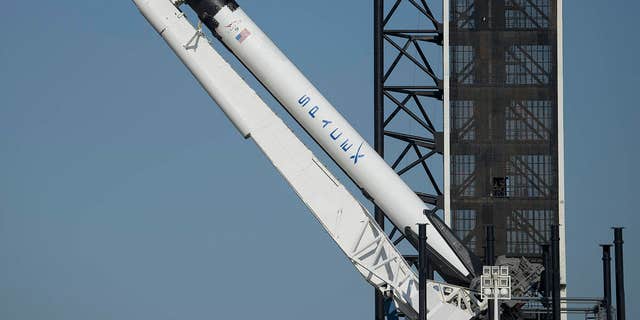 NASA said Friday that it has given the green light to next week's launch of two astronauts aboard a SpaceX vessel - the first crewed space flight to leave from USA soil in nine years.

A photo released by NASA on Thursday showed the Falcon 9 rocket and Crew Dragon being raised into a vertical position on Kennedy Space Center's launch pad 39A, which was also used for the Apollo and space shuttle programs.

USA astronauts have been flying to the ISS on Russian Soyuz rockets since the space shuttle program ended in 2011.

The mission will involve Behnken and Hurley launching to space, then making a rendezvous with the ISS in Crew Dragon, which will autonomous dock with the station if all goes to plan.

Despite the fact that Behnken and Hurley are going to spend a bit of time at the ISS on this mission, this isn't actually an operational launch - it's the final demonstration mission in SpaceX's human rating process for the NASA Commercial Crew program.

This is also notable as the first space flight programme to be carried out as a public-private partnership, with SpaceX producing the Crew Dragon spacecraft and Boeing producing the Starliner.

The end of the mission will involve the Crew Dragon detaching from the Space Station with the astronauts on board, and perform a controlled re-entry and descent into the ocean where they'll be picked up by SpaceX's recovery crew.

Launched atop the Falcon 9 rocket, Crew Dragon will accelerate to approximately 17,000 miles per hour, according to NASA, placing the capsule on course for the International Space Station.