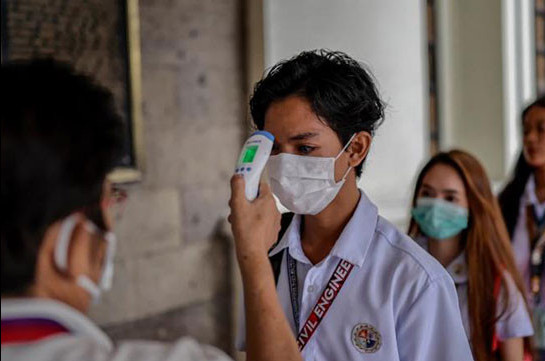 A 57-year-old man in Japan who contracted the new coronavirus and threatened to intentionally spread it in public spaces has died, according to multiple news reports from Japan.

A woman who works at the hostess bar he went to tested positive for the virus about a week after she came into contact with the man. The woman's nationality has not been disclosed.

The police had planned to question him on suspicion of obstruction of business after he left the hospital, to which he was admitted on March 5.

At the Filipino pub, the man sang karaoke and put his arm around a female employee who was serving him, a source knowledgeable of the situation said.

An Aichi official said that people who test positive are in principle hospitalised but that if there is no bed available, they are told to stay home. However, he was said to have had a severe chronic illness before he became infected with with the novel coronavirus, which causes the disease COVID-19, persons familiar with the matter said. Instead, he told his family he was going to "scatter" the virus before heading out to two bars that night, Reuters reported.

Aichi Prefecture now has the second highest number of domestic COVID-19 infections at about 120, after Hokkaido, where some 150 cases have been confirmed.

On the afternoon of March 4, medical personnel sent the man home after he was confirmed to be infected with the coronavirus.

'Do Not Go Overseas': Government Updates Travel Advice
It does not apply to the United Kingdom , which has also advised citizens against non-essential overseas travel for 30 days. New Zealand's foreign affairs ministry warned more routes were set to shut down amid widespread travel restrictions. 3/18/2020

EastEnders SUSPEND filming and cut their weekly episodes amid coronavirus
We will continue to follow the latest news and advice from the World Health Organization and Public Health England. ITV has not yet announced whether programmes such as Coronation Street and Emmerdale will follow suit. 3/18/2020

Over 1000 Prisoners Escape Brazilian Prison Amid Coronavirus Outbreak
It added that 174 inmates have already been recaptured, while local media estimates over 1,000 prisoners could be on the loose. But that caused hundreds of prisoners to rebel against their guards, set fires and escape. 3/18/2020