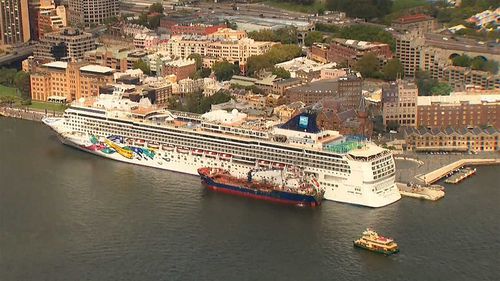 A man is being tested for coronavirus on Norwegian Jewel, a cruise ship that travels to New Zealand.

A man is being tested for coronavirus on a cruise ship docked in Sydney, which travelled around New Zealand.

It is unclear where the man, who Australian media reports is Singaporean, boarded the vessel.

"We have no guests with any respiratory-related illness on board. The vessel remains in operation and all guests on board are in good health".

The presence of Australian health officials on the ship caused concern among staff and passengers, amid initial erroneous reports of a confirmed coronavirus case. "There is absolutely no truth to those stories".

The ship is due to depart Sydney later today for a two week cruise around Australia and New Zealand. During Norwegian Jewel's sailing from Auckland to Sydney, a few guests on board experienced a stomach-related illness.

A "thorough inspection and rigorous cleaning and disinfection" of the ship was also performed on Friday.

A NSW Health spokesperson said one person had been tested for a respiratory illness as a precaution but there was "no indication" they had contracted coronavirus.

Another cruise ship, the MS Westerdam, finally docked in Cambodia on Friday after being denied entry by five countries.

"None had been in China in the previous 14 days and there was no outbreak of any disease on board".

"They said that Australian health department needed to be able to clear the ship and that they were taking a look at any passengers that had any symptoms at all of respiratory issues,"she told Reuters outside the Sydney terminal".