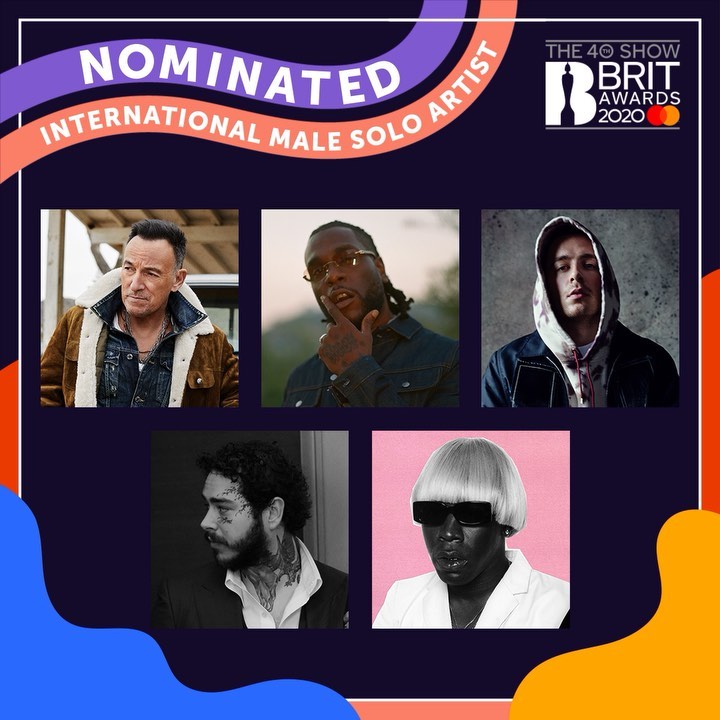 Burna Boy, on January 11, 2020, was nominated for Best International Male Artist at the BRIT Awards 2020.

Both will contest the same categories at next month's ceremony: male solo artist, best new artist, song of the year and Mastercard album of the year.

Dave is in the running for his single "Location" and the album "Psychodrama", for which he won the Mercury Prize previous year.

The Scottish singer and songwriter Capaldi, 23, also received a nod to the song of the year for "Someone You Loved", as did Stormzy for "Vossi Bop".

The report is nominated alongside Stormzy's "Heavy Is the Head", one in all three nominations the grime star obtained, along with Dave's "Psychodrama", Harry Varieties' "Efficient Line", and Michael Kiwanuka's "KIWANUKA". Dave is also nominated for Best New Artist.

Elsewhere on the nominations list, AJ Tracey is up for Song of the Year for "Ladbroke Grove", while Calvin Harris is also nominated in the same category for the Rag'n'Bone Man-featuring "Giant". Bastille, Bring Me The Horizon, Coldplay, D-Block Europe and Foals are all in the running for Best Group.

"As well as a rejig of the award categories, the BRITS Critics" Choice Award has evolved into the Rising Star Award, which was announced in December.

The BRITs will take place at London's O2 Arena on Tuesday, February 18th and will air live on ITV.