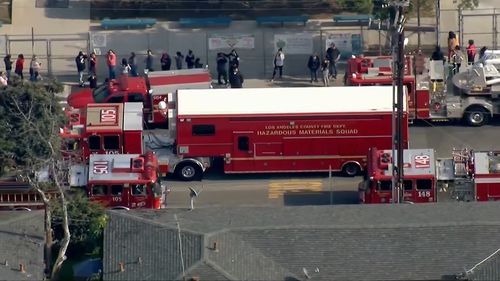 A number of children and adults are being treated for injuries over what's being reported as a plane dumping fuel over an elementary school in Cudahy, CA.

Officials did not provide the name of the school, but Sky5 video showed multiple first responder units - including ambulances - at the scene of Park Avenue Elementary School, which is about 14 miles east of Los Angeles International Airport.

The fire department did not immediately identify the school. Paramedics are treating those complaining of skin irritation or breathing problems.

The fire department said those injured suffered minor injuries and no one was taken to hospital.

Initial reports indicated the area smelled of jet fuel, and firefighters later confirmed that was the type of substance dropped.

The department said the incident was in the 8000 block of Park Avenue, and 70 firefighters and paramedics reportedly responded.

A Delta spokesman told DailyMail.com: 'Shortly after takeoff, Flight 89 from LAX to Shanghai experienced an engine issue requiring the aircraft to return to LAX.

"The aircraft landed safely after an emergency fuel release to reduce landing weight", the statement read.