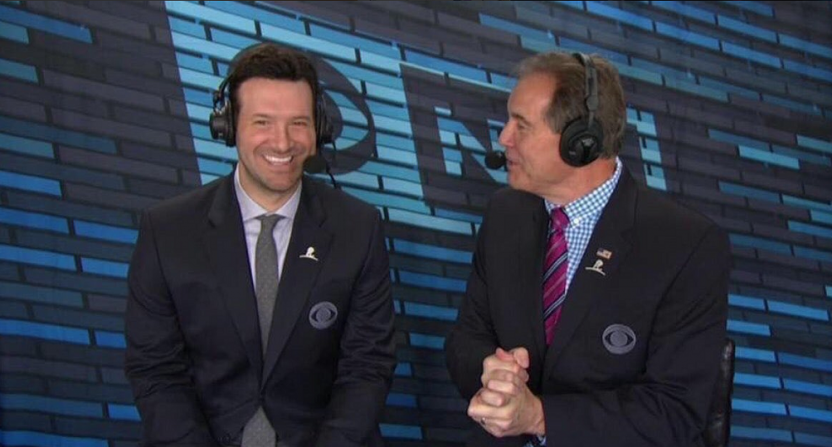 ESPN is prepared to make him the highest-paid ever in the business, according to Mike McCarthy of Front Office Sports.

The 39-year-old former Dallas Cowboys quarterback becomes a broadcasting free agent this offseason. It would be a multi-year deal that would pay him between $10-$14 million per year.

For comparison, Front Office Sports reports that Troy Aikman, Fox's top National Football League analyst, makes about $7.5 million per year, while Jon Gruden earned about $6.5 million a year at ESPN for MNF duties prior to returning to the Oakland Raiders.

CBS would have the right to match any contract offer.

NBC has Al Michaels and Chris Collinsworth, FOX has Joe Buck and Aikman and CBS deploys Jim Nantz and Romo, while ESPN's booth of Joe Tessitore and Booger McFarland is often heavily criticized.

Tony Romo is about toget paid, whether it's from his current employer and a new one.

In his role, Rikhoff works closely with Romo, though is understood their respective futures are not directly linked.

Though ESPN covets Romo as an analyst, it's no sure thing that he leaves them.

Before returning to the Oakland Raiders, Jon Gruden earned over $6 million a year from ESPN to call Monday Night Football. Last month the broadcaster reported Monday Night Football recorded its highest audience since 2015, finishing the 17-game schedule in 2019 with 12,569,000, an eight percent increase from the previous year.