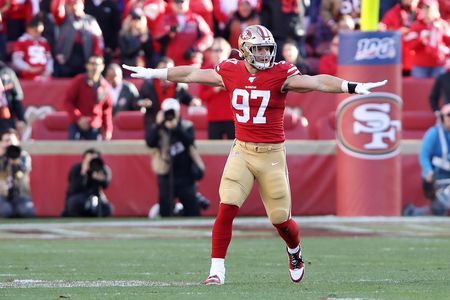 Seemingly unblockable at times, he finished his first National Football League season with nine sacks, 25 quarterback hits, 47 total tackles and one interception in 14 starts and 16 total games. Bosa also was named defensive rookie of the year, with Raiders running back Josh Jacobs taking offensive honors. He had nine sacks and 47 tackles during the regular season, then added two more sacks in Saturday's 27-10 divisional round victory over the Vikings. His most recognizable play came during his crucial fourth-down stop against Jacob Hollister and the Seattle Seahawks in Week 17 that ultimately sealed the 49ers top seed in the NFC. Overall, he led all rookies with 1,327 scrimmage yards and 1,641 all-purpose yards.

Jason Kelce has been racking up the accolades since the season came to an end and on Monday, the Eagles star was named to the Professional Football Writers of America 2019 All-NFL team.